Plane crash drill: Preparing for the worst at Paine Field 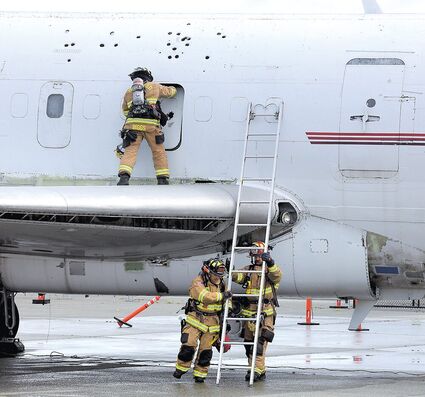 Fire Department personnel from across Snohomish County responded to a plane crash drill at Paine Field. Here, firefighters access one of the doors of the Boeing 727 training aircraft used in the drill.

It's a scenario no one wants to think about.

A commercial airplane with 35 passengers and crew accelerates for takeoff from Paine Field. Without warning, a flock of birds flies into the airplane's left engine, causing the aircraft to veer sharply to the left, damaging the right wing. The pilot applies the brakes in an attempt to stop the aircraft, but it ends up leaving the runway, clipping the left wing on a hangar building.

The aircraft finally comes to a full stop at the ramp to the Flying Heritage and Combat Armor Museum. The plane rests on its wheels, with smoke rising from the brakes...