Eagle takes off from Hickman Park 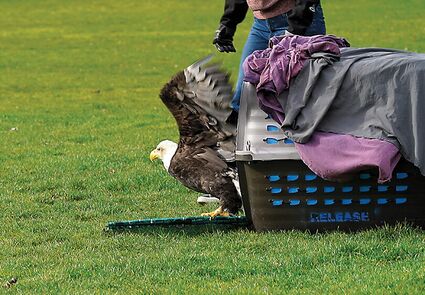 In this sequence of photos from freedom to flight, a rehabilitated bald eagle took to the top of a tree after being released from Hickman Park in Edmonds. "The eagle was larger than even I imagined it would be," said Maria Montalvo. "So stunningly and impressively beautiful."

A rehabilitated bald eagle took off from Hickman Park in Edmonds on March 18 after receiving care from PAWS, the Lynnwood-based nonprofit whose mission includes rehabilitating orphaned and injured wildlife and releasing them back into the wild when possible.

"It's spectacular to see a bald eagle in the wild – they're so majestic," said PAWS Executive Director Heidi Wills Yamada, one of several at the release.

"Thanks to the important work by PAWS, this one was saved when it would have otherwise perished. Now she will again grace the sky in Edmonds."

"This eagle was presumably in a territo...