Knights off to a tough start in league play 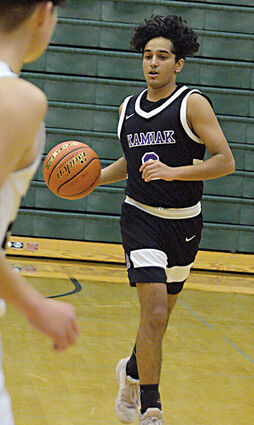 An undermanned Kamiak boys basketball team dropped its first two league games, but then rebounded for a huge nonconference victory over Arlington.,

Junior Jaytin Hara scored a season-high 26 points and junior Josiah Pierre added 21 points to lead the Knights to a 72-60 victory over the Eagles Saturday, Jan. 15, at Kamiak High School.

Coach Joe DeGrazia said the poor free throw shooting that hurt Kamiak in a 58-41 loss to Glacier Peak and a 59-47 defeat to Jackson earlier in the week wasn't a problem Saturday afternoon.

"He had a great game," DeGrazia said. "He was pretty aggressive on offense. ... He was drawing fouls. He was in the bonus. He converted those. That was huge for us."

Kamiak was without senior starters Wesley Garrett and Zachary Meyer, who both missed all three games for undisclosed reasons. DeGrazia was hoping to have the two back this week.

"We've been relying on our juniors to step up and play bigger roles," DeGrazia said.

In addition to his strong offensive performance, Pierre also excelled on defense, limiting Arlington's main scoring threat Ethan Martin to 14 points, below his season average of 20.

"Josiah Pierre did a great job of guarding him," DeGrazia said. "It was huge for him to come up with stops against him."

Pierre also was aggressive on offense, especially in the first half.

"They put a lot of attention on him in the second half, and that created opportunities for others," DeGrazia said.

"He is really developing," DeGrazia said. "He gives us two, three, four steals a game. He's a good teammate. He brings good energy. He has a knack for the ball. He's strong physically. He's starting to contribute on offense more."

"We have a solid group of juniors," he said.

Kamiak (0-2 in the league, 6-4) sustained the momentum from Saturday's victory with an 84-45 victory over Kent-Meridian in another nonconference contest. Pierre scored a season-high 27 points and Loudenback had 15 points and 12 rebounds.

Up next for Kamiak is a showdown with district rival Mariner at 7:15 p.m. Friday, Jan. 21, at Kamiak High School.