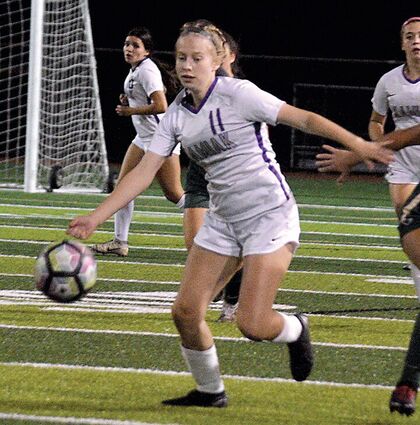 Kamiak's Elizabeth Plitnik looks to move the ball up the field against Redmond.

The Knights didn't come away with the victory they were looking for against the Mustangs in a nonconference girls soccer clash Thursday, Sept. 16, at Redmond High School.

Instead, the two teams battled to a 0-0 tie.

Kamiak coach Kosta Pitharoulis, however, had no complaints about the Knights' performance in what was the team's sixth nonconference game of the season.

"Our effort is important, and we gave it a full maximum effort for 80 minutes," he said. "We were breaking them down, and probably the whole second half we were playing on their half of the field and unfortunately, one just didn...