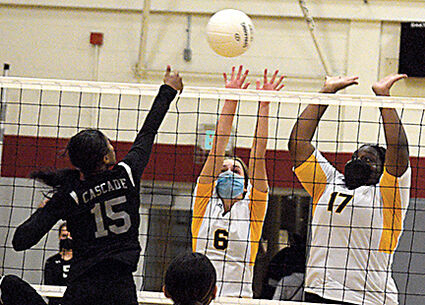 Mariner's Elsie Rudberg and Leila Mbaye go up for the block against Cascade's Sahara Jada Keys.

New Mariner coach Randal Gullette told her players she had confidence in them.

In a back-and-forth second set against Cascade, neither team seemed to be able to put the other one away.

The Bruins had three set points, while Mariner had two, as the two teams eventually were deadlocked at 29.

The Marauders then recorded back-to-back points to pull out the set and went on to win 25-13, 31-29 25-21 in a nonconference volleyball match Wednesday, Sept. 8, at Cascade High School.

"What I kept telling the girls was that I wasn't scared. We've got this," said Gullette, previously an assistant coach...