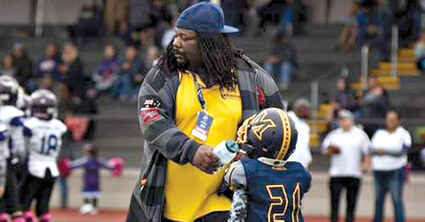 Mariner Junior Football coach Albert "Coach Bigg" Okumbe with one of his players.

Mariner Junior Football is mourning the loss of a coach and friend.

A fundraiser has been launched to cover the funeral expresses for Albert "Coach Bigg" Okumbe, who recently died.

"Coach Bigg had such a positive effect on so many in the Mariner football family," Anker said. "Coach Bigg coached so many of our kids through the years, and this is a huge loss for the community, for the program and especially his family and friends Words can't describe how much we are all going to miss him and the impa...