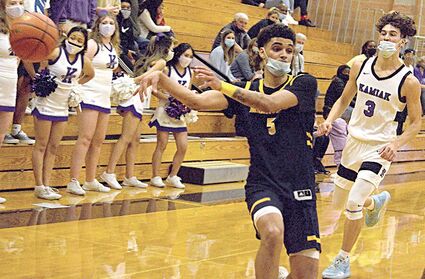 Mariner's Henry Avra throws a no-look pass to a teammate.

BJ Kolly did not end up as the leading scorer for Mariner in its victory over Kamiak.

But Kolly's dominating inside presence made all the difference.

Mariner (9-0) took a 23-14 lead into the second quarter when the 6-foot-8 center seized the moment. Kolly scored eight straight points to extend the Marauders' lead to 31-17. When Kamiak (6-2) was forced to pay more attention to Kolly, who finished with 18 points, the floor opened up for the rest of the Marauders.