Goal is to raise funds for Dawson's Place 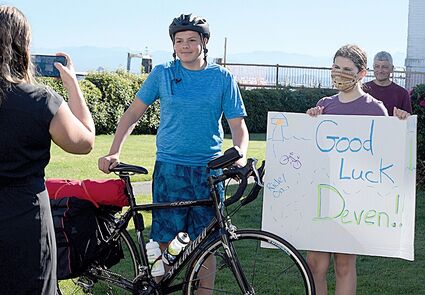 Deven Boyce poses with a friend before his departure from Lighthouse Park. Boyce left June 2 for a cross-country trip scheduled to end at the Statue of Liberty in New York.

Deven Boyce is embarking on a trip of a lifetime.

On Wednesday, June 2, Boyce, an eighth grader at Harbour Pointe Middle School, departed Mukilteo Lighthouse Park on his bicycle. His destination is about 3,200 miles away in New York City – the Statue of Liberty. Deven expects to arrive there at the end of July or early August.

The Light to Liberty ride – what Deven is calling his trip – is his way of supporting Dawson's Place, a child advocacy center in Everett that played an important role in Boyce's life. Deven is hoping that people will donate to the nonprofit organization that offers a wide range of services for victims of childhood trauma.

"I chose them because of what I've been through," said Deven, who now lives with his grandparents.

He also plans to visit the headquarters of the National Children's Alliance, another child advocacy organization, in Washington D.C.

"The idea is to teach Deven on how to pay it forward for other children who need similar services," said Jon Boyce, Deven's grandfather. "It's a way to say thank you for the work you're doing," Jon said.

A large group of family, friends and supporters gathered at Lighthouse Park to show their support for Deven. After posing for photos, Deven walked his bicycle over to the Puget Sound and dipped his tires in the water.

The Light to Liberty ride isn't Deven's first long bicycle trip. He and his grandfather have biked in Europe for 11 weeks. 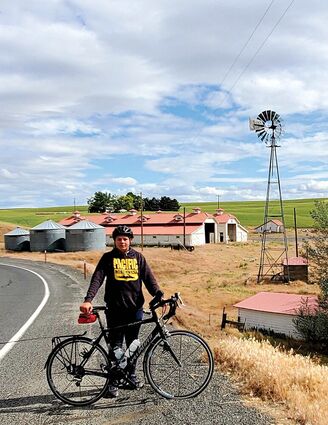 "He loves to bicycle,"said Jon, who is providing logistical support . "It's been really good for him."

The idea to bike to the Statue of Liberty was Deven's. "I've never been there. I wanted to see it," he said.

Deven should arrive in Idaho by Wednesday.

"Deven is unwavering in his grit and determination," Jon said.

The cross-country trip is going to be an eye-opening experience for the 14-year-old. He's never been further east than Montana or further south than Texas.

"It's a chance to meet the people of America," Jon said.

For more information on Deven's trip and to donate to Dawson's Place see https://bit.ly/359jLx2.