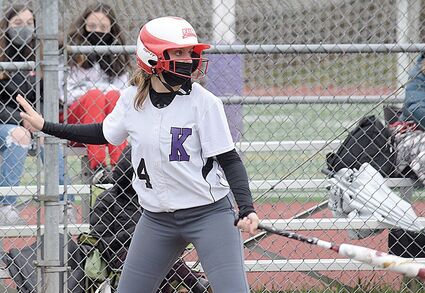 Kamiak's Camdyn Robinson waits for the pitch during a Wesco game against Archbishop Murphy.

Kamiak's six seniors have a twofold mission in 2021.

First and foremost, they want to enjoy their final season at Kamiak. The seniors also will be taking on a mentoring role with the rest of the team, which is composed of five freshmen and three sophomores.

After having last season canceled to the coronavirus pandemic, coach Ann Bradley is glad the seniors will have this last opportunity to be together.

"It felt good to be back out here," Bradley said following the Knights' 14-0 season-opening victory over Archbishop Murphy Wednesday, April 7. "I'm thankful that the seniors get to play again, and we have a great group of young players that have so much potential. It'll be nice to have the older girls give the younger girls some skills to play high school ball."

Senior co-captain Katelyn Sonnichsen admitted it was a little weird to be on the field for a game after about a two-year absence.

"It's really fun to come out and play with all of your friends one last time," she added.

"I feel like we have a lot of good freshmen," she said.

Bushnell and the other seniors are ready to share their knowledge.

"We can divvy up the underclassmen, take everybody under our wing," she said. "It's a lot of one-on-one time."

Bushnell, Sonnichsen, and the other four seniors – Natalie Smullin, Camdyn Robinson, Kelci Carroll, and Sara Schnurman – along with the talented underclassmen, form what could be Kamiak's best team in recent years.

"We have a lot of pitching," Bradley said. "There's not a weak spot in our lineup hitting."

Kamiak's hitters continue to batter the opposition's pitching in a 10-0 victory over Cascade in a Thursday, April 8, matchup.

"These girls are ready to hit," Bradley said. "The better the pitcher, the better hitters they are."

Sonnichsen likes how the Knights came together in its opener.

"The big thing for us was playing as a team," she said. "We mostly focused on playing together as one rather than playing for ourselves. We came out with a good attitude to get ahead early." 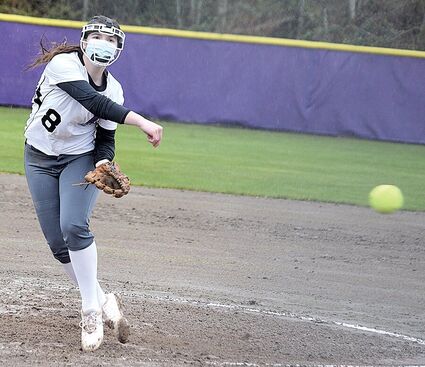 When Wesco athletic directors devised the prep schedule, they decided against any postseason tournaments. While Sonnichsen and Bushnell are disappointed, they both acknowledge there are more important things than districts and state.

"As long as we're out here playing together, that's all we care about," Sonnichsen said.

Bushnell said that the Knights' goal is to win as many games as they can this season.

"And then it's competing with every single team and giving it our all," she said. "Because of the shortened season, it's like we're just throwing everything out there."

Bradley likes what she's seeing from her players. "We kind of had a mindset of 'let's just go have fun,''' she said. "Let's learn from each other, have a good time, and show everybody who we are.

"I will never take for granted the idea that we can just play a game."