Over the river and out of the woods, finally | Chuck's World 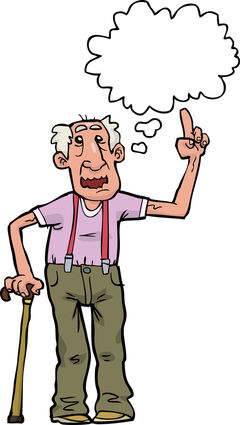 In the years after his retirement and before he passed away, I noticed that my father had aged into a cliché.

He was always social, but he'd become garrulous, happy to engage in trivial conversations with perfect strangers even if they weren't actually participating.

It was amusing to see my dad turn into a caricature, the older man who enjoys nothing better than chatting up a 20-something grocery store employee as if it were going to be the high point of their day.

My dad was a friendly and witty man, though, and all sorts of people liked to talk to him. Still, I've made it a point to watch my own behavior as the years go on, trying to avoid becoming too predictable, assuming that the person ringing up my groceries won't mind a minute or two of peace and quiet.

And now I'm Chatty Cathy, because essential workers are the only people I see. I stare deeply into the eyes staring back at me over the mask, and I feel confident that this person needs to know all about my day so far.

It's a pathology, and I'm leaning into it.

Last weekend, then, I was happy to tell a pharmacist about my drive to the drugstore. I mentioned that it was a beautiful day outside, and I even had to put on sunglasses, always a momentous sign of spring. I told her that as I drove over the Snohomish River, I almost burst into tears.

"I miss outside," I said, and she laughed a lot. It was a big win for old dudes everywhere.

There's a simple explanation. Although there was really nothing stopping me from leaving the house, heading out for a long drive just to get out, going for a hike, walking on the waterfront, it turned out that isolation was an easy habit to acquire.

Last weekend I was the furthest I've been from my house in over six months, and that's on me.

At least I made a pharmacist laugh, and then she poked me with a needle and I was done. I'm now free to move about the country.

I've been reasonably successful in fighting off vaccination envy for the past couple of months, as photos began propagating and cards were proudly displayed. My social circle consists of a lot of folks slightly older than I am, including my wife, and I watched them check off their statuses as the weeks passed and wondered when it would be my turn.

I'm over 60 but under 65, so I wasn't eligible until March 31. That came in the middle of the busiest week of my year, so I didn't even make my first attempt until Easter Sunday. My threshold for annoyance at inefficient systems is very low, so there were moments when I was pretty sure I wouldn't get a vaccine until July.

But I did what a lot of us have done – took suggestions from friends, refreshed my screen, and spun the vaccine roulette wheel until I got lucky. I found an appointment, 25 minutes away, for a Janssen jab, and even as stories were floating around about Johnson & Johnson not having as many doses as they anticipated, it was smooth and uneventful.

I don't want to gloss over the aftereffects. The vaccinated arm still aches, and I spent the better part of 48 hours coming to terms with an immune system that has been essentially unemployed for a year. I had the feeling that my white cells just got their first paycheck in months and headed straight for a bar.

I've felt this way after flu shots, though, and all of this was minor (and over the weekend). And as much as I wanted to get it done and out of the way, I knew that every person vaccinated in this area was making my life safer.

I felt safe anyway, being naturally homebound and used to all of this by now.

As soon as I got the appointment, though, I started throwing money at airlines.

I've felt fortunate this past year, as my wife and I had a huge travel summer in 2019, making several trips around the country and to Europe. We haven't had as much of an itch to leave town as we might have otherwise, but I haven't seen my 84-year-old mother in nearly two years, and then I've got a grandson.

I'm ready to get reacquainted with everyone. Even people in the middle seats.

I've also been fortunate to live where I do, and so have you. We were struck first and maybe that made all the difference, but most of us seemed aware and on the same page (if maybe a little uncertain about masks and noses).

We are one country, but we've had many different pandemics, and I'm just grateful for all of you staying safe and keeping the rest of us that way.

And for spring, and sun, and nice drives with familiar landmarks. I'm grateful for the pharmacists and techs, for health-care workers in all capacities, for grocery store employees, and delivery drivers.

I'm grateful for the technology that kept us in touch and helped some big brains develop a vaccine with astonishing speed.

And I'm grateful for nature, including rivers, which make my heart swell and my eyes tear up. I really should get out more, I guess.