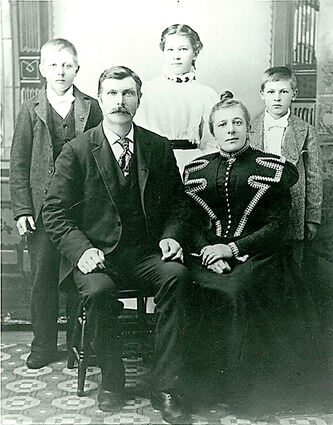 Paul Losvar family, ca. 1895: Paul and Walborg seated in front; Adolph, Charlotte ("Lottie") and George standing in back. A fourth child died in infancy. (Walborg was stepmother to Paul's children).

Before the condominiums were built at 610 Front St., the property was home to the Losar family's Mukilteo Boathouse and Marina.

Family business founder Paul Losvar was born in Norway in 1848 and immigrated to the U.S. in 1881. He and his first wife Hanna initially settled in Michigan where they had four children. After his first wife died, Paul married Walborg Smedberg in 1895.

Paul Losvar was a carpenter and boatbuilder. In 1905, he brought his family from Michigan to Mukilteo to join a relative engaged in boat repair work. They repaired masts and spars of sailing ships and built special boats. One of the larger boats they built was christened the "Mukilteo," a 50-foot tugboat used by the Crown Lumber Company to bring sailing ships to and from the company's docks.

In 1906, Paul Losvar took over the business and purchased 300 feet of waterfront property next to the Mukilteo Light Station. There he built a home and production facilities for building small boats for rent by fishermen and vacationers. Paul and his son George operated this business for many years. Paul's wife, Walborg, died in 1907 and is buried in

Mukilteo's Pioneer Cemetery. Living next to the light station, Paul's son George got to know the lighthouse keeper's daughter, Anna Christiansen. They fell in love and, in1910, were the first couple to be married in Mukilteo's Presbyterian Church.

Known as Losvar's Mukilteo Boathouse, the small boatbuilding and rental business flourished with Paul and George at the helm. The first rental boats built by the Mukilteo Boathouse were 12-foot rowboats. They were built by hand with cedar planking and round bottoms. People came from Seattle and many surrounding areas to rent them.

Later, the Losvars designed, built, and rented a slightly larger style of boat that was very popular with fishermen. Called "Muk Boats," they had a distinctive raised bow and could accommodate outboard motors. About 16-feet in length, the hull was V-shaped in the bow which then transitioned to a rounded bottom. Adapted from a Norwegian design, they were relatively stable in moderate seas. Advertisements claimed, "There Has Never Been a Casualty in a Mukilteo Boat!"

When 84-year-old Paul Losvar died in 1932, his son George left his job at Crown Lumber Company to devote full-time to the family business. Later a third generation of joined the family business when George's sons, Art and Albert, learned the trade. Art and Albert were particularly interested in outboard motors. In 1950, they purchased a 50-foot property located between the boathouse and ferry terminal and established an Evinrude dealership and repair shop there. The property had previously been home to the Chambers Beach Boat Shop. 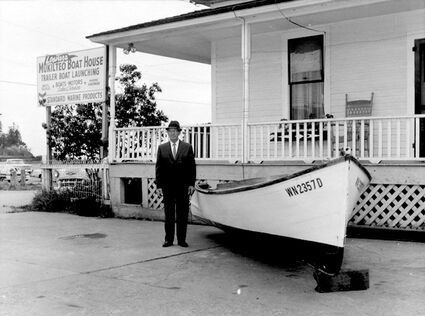 George Losvar with Mukilteo Boat in front of family home on Front Street.

The Losvars refurbished the Chambers building for their Evinrude dealership, which then became known as the Mukilteo Boat House Marina. While this part of the business grew, the boat building business began to wane. George Losvar retired, and the last Mukilteo Boat was built in 1951, although the boat rental business continued for some time after that. Art Losvar's fascination with motorized boats led to his involvement in boat racing. He entered races throughout the Pacific Northwest and set 10 national speed records. He put his boat racing career on hold in 1960 in order to focus on the family businesses.

Under Art's leadership, the Mukilteo Boat House Marina continued to operate through the 1960s. In 1970, Art decided to close the family business that had operated for three generations. The property was sold, and the buildings were demolished to make way for luxury condominiums that were built on the site. George and Anna Losvar were one of the first tenants in the new condominium, living on the top floor in a prize unit overlooking the lighthouse and water and mountains beyond. Anna died in 1979; George lived to age 97, passing away in 1983. Art Losvar died in 2020 at age 94.