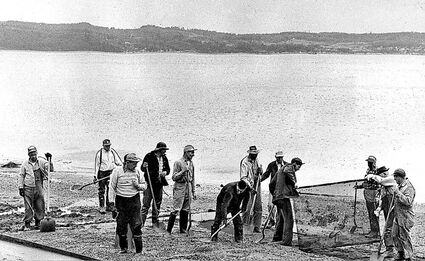 The area now known as Mukilteo Lighthouse Park has a long history. Native Americans used the land for thousands of years and local tribes held inter-tribal conferences in this area. Due to this rich history, any digging or project requires a consultation with archeologists due to the potential to disrupt the shell midden or artifacts.

A big storm in 1913 tore away all the bulkheads, woodshed, boathouse, and chicken house and tipped and undermined their house.

Her father, Ed Wilson, "rowed the family over to the railroad and they rented until the house was placed back on its foundation."

She remembered it as a paradise during that time, with deer coming down to the beach to lick salt from the rocks. She recalled the gulches were full of bleeding hearts, maidenhair ferns and trilliums with creeks running through. Edith's descriptions aligned with Captain George Vancouver's observations when he arrived in 1792. He spoke of the beauties of this region, the serenity of the climate and the pleasing landscapes. He named this area Rose Point because of the wild roses he found.

In 1954, the Washington State Parks and Recreation Commission acquired 17 acres of land on Possession Sound, next to the Mukilteo Light Station, to develop into a state park. The story is that a delegation of officials was sent to decide if they wanted to do it, so the women of the community invited them to a dinner to convince them.

The U.S. Coast Guard donated an acre of swampy land from the station's southwest corner to the new park. The park was constructed on filled tideland to provide beach access and attract tourists and was mostly a large asphalt parking lot servicing its four-lane boat launch ramp. Volunteers began building the ramp in 1955 by pouring concrete forms. The state oversaw the rest of the ramp work before Mukilteo State Park opened to the public in July 1957.

It is a challenging boat launch due to the water depth and was utilized more before the Everett Marina opened. It is particularly busy during humpy or pink salmon season. The main attraction of the park was a 1,495-foot-long strip of sandy and rocky beach where people would picnic, sunbathe, or fly kites. The lighthouse was not part of the park during this period and was owned by the U.S. Coast Guard. Visits were limited to special invitations or school tours. A fence separated the federal property from the park.

In October 1998, Representative Jack Metcalf (R-Washington) introduced a bill to Congress that permanently transferred ownership of the entire Mukilteo Light Station from the U.S. Coast Guard to the city of Mukilteo. This transfer was completed in 2001.

Now, the centerpiece of the park could be the unique Victorian style lighthouse designed by architect, Carl Leick, built in 1905. The HR4207 (b) Terms of Conveyance specifies, "the property is to be used as a nonprofit center for the interpretation and preservation of maritime history; is to be main-

tained in a manner that ensures its present or future use as a Coast Guard aid to navigation; and is to be maintained in a manner consistent with the provisions of the National Historic Preservation Act of 1966."

The partnership between the city of Mukilteo and the Mukilteo Historical Society was a major part of this transfer, recognizing a non-profit organization was involved in the preservation of history and caretaking of the Light Station and property.

In 2002, the Washington State Parks and Recreation Commission, facing budget issues, offered to give the 18-acre Mukilteo State Park to the city of Mukilteo. On Nov. 4, 2002, the Mukilteo City Council passed a resolution to accept transfer of the park, which included $449,000 that the state appropriated for maintenance and renovations. In January 2003, the City Council voted to rename it, Mukilteo Lighthouse Park. On Feb. 4, 2003, Gov. Gary Locke deeded the state park to Mukilteo and ownership was officially transferred on March 26, 2003.

In 2004, the City Council adopted a Lighthouse Park Master Plan to make physical improvements to the park and provide ways to celebrate and provide public use to the historic lighthouse, which is on the National Register of Historic Places. Four phases to the plan were developed, and the city of Mukilteo used a grant from the Washington Wildlife and Recreation Program (WWRP) to begin the first phase of development.

The first iteration of the plan included removing the fence to incorporate the lighthouse grounds into the park. There were concerns that this would take away from the special feeling of the lighthouse grounds, so the Mukilteo Historical Society (MHS) asked the city to maintain the picket fence. Another part of the plan included taking down the historic garage and interpretive center near the lighthouse, so MHS stepped up to renominate the whole light station on the historic register.

Phase 1 included restoring the shore lands to a natural condition to stabilize sandy soils, developing a waterfront path along the park's shoreline, adding landscaped areas and sheltered picnic sites, an interpretive program with displays and viewpoints, a new restroom and disabled access to the shoreline with a new parking area. Playground facilities, a beach volleyball court and anchoring several driftwood logs along the water were included in this renovation.

Phase 2 improvements included new fencing defining the boundary of the light station, a curb less roundabout in front of the lighthouse, shoreline and drought tolerant plants, a picnic shelter/bandshell, restrooms, and safe and accessible walkways.

Archeologists were required on site during these renovations and if an artifact were found during digging, they would investigate. With archeologists available, the whole street in front of the lighthouse grounds was raised to remove a step up to the light station grounds and utility lines were buried, as digging was not an option. A standalone garden shed (big enough for a tea party) was relocated to the community garden and the city built a new gardening shed on the back of the garage to replace it.

To keep the historic environment of the lighthouse in the public awareness, the city added a sign designating that visitors were entering a historical property. The sidewalks were widened to make them ADA (Americans with Disabilities Act) compliant. A step up to enter the lighthouse was removed and a slope created, so it was ADA accessible. Wide board fencing replaced the old chain-link fencing, since adding picket fencing would not be original. Benches were added. During this phase of work, the city provided rooms at Rosehill for MHS to work, which meant not being able to access the buildings or knowing when they could open the lighthouse. 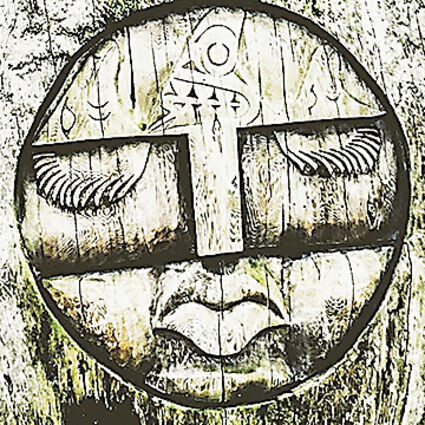 In honor of the tribes, artwork installed in the park is by James Madison, Tulalip master carver, who created a stunning 18-foot driftwood carving reminding everyone that "Mother Earth" is always watching. Madison collaborated with another Tulalip artist, Joe Gobin, to create a big metal cube sculpture, concrete planters, and the art on the sidewalks.

Phase 1 and 2 are complete. Phase 3 plans include improvements to Front Street, an entry staircase from the speedway, completion of a park driveway and new parking in the southeast corner of the park. Phase 4 includes completion of the pathway system, a new pedestrian pier, and updating the central lawn and festival area.

Special thanks to Ann Collier and Christopher Summitt