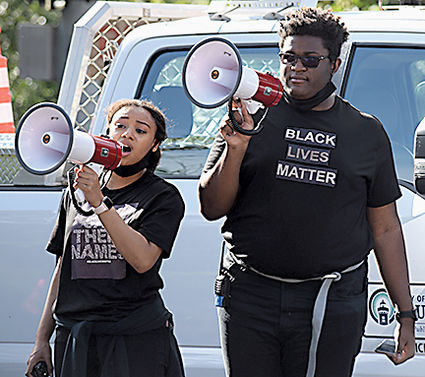 Kamiak graduates and Black Lives Matter protest leaders Jordyn Porea and Alexander Callaway were two of the participants in the City of Mukilteo's virtual roundtable.

In the aftermath of the death of George Floyd and the renewed interest in the Black Lives Matter movement, the City of Mukilteo hosted a virtual roundtable with the goal of addressing a wide-range of subjects, including policing, equity, inclusion and racism-related issues.

But it was no surprise that much of the conversation during the Wednesday, July 1, event revolved around the Mukilteo Police Department and its policies and role in the community.

In his opening remarks, Police Chief Cheol Kang said the recent retirement of two longtime officers reminded him of what defines the culture of the department.

"They did their work with heart," Kang said. "Terms like community policing and deescalation, these are kind of hot buzzwords that are out there, but this is something that's been inherent in our organization. It's not what we strive to do. It's plain and simple. It's just what we do every day here when we do our job."

Kang has heard from many community members and even others nationally and internationally in recent weeks. He said people want to talk to him about changes in policing practices and what needs to happen in Mukilteo and across the nation.

"We hear you, and we are internally continually reviewing everything that we do and seeing ways and processes that meet the expectations of our community and our systems," Kang said. "What do we do out there to be more efficient to deliver the best product and service?"

Kang took the opportunity to announce that the police department is in the process of removing one particular policy out of its manual – carotid control hold – a technique used to restrain a violent or combative suspect by restricting the flow of blood to the brain by compressing the sides of the neck.

"In our view, that's not needed and quite frankly, no one in our department actually is even authorized or trained to utilize that particular technique," Kang said. "So we are going to remove this as a department-approved technique from our use-of-force policy."

The roundtable included student leaders from the Black Lives Matter movement, representatives from community organizations, councilmembers, police and those interested in policy reforms.

One roundtable participant said she repeatedly watched the Floyd video and

asked Kang about accountability in the Mukilteo Police Department.

Kang cited a provision in the department's use of force policy that addresses an officer's duty to intercede.

"So if in the event that an officer sees, for example, another officer improperly employing force or doing something that was inappropriate, they have a duty – because they know that it's wrong – to intercede, and that is clear and in the policy."

In response to Councilmember Joe Marine's request for feedback on participants' interactions with the police department, Jordyn Porea and Alexander Callaway shared their own and their families' experiences. The two Kamiak High School graduates organized Mukilteo's Peaceful Protest in June. (https://bit.ly/3gAaOR3)

Callaway recalled driving in Mukilteo about a year ago and being pulled over by the police.

"When he pulled me over, he didn't want me to move at all," Callaway said. "He says 'Don't move,' and I was not allowed to move."

Porea said that people of color are taught when they are young how they should act if they get pulled over by the police.

"You keep your hands up on the steering wheel," she said. "You don't say anything unless they ask you a question. ... None of my friends, who are people that aren't of color, have to learn that."

Porea added that her father has had some questionionable interactions with the Mukilteo Police.

"I can say that there were a few instances where my dad has personally been pulled over. He wasn't doing anything illegal," Porea said. "But cops would just ask what he was doing in the City, and I don't think that's a valid reason to pull someone over. ... I don't really understand why that occurred."

While she said she had a good relationship with the student resource officer at Kamiak, Porea isn't sure whether officers should be armed in schools.

"I'm not sure if that's necessary," Porea said. "Why are we arming officers and police in schools, because I feel like that adds another level of stress. ... I think that would be something to reconsider."

Roundtable participant Jon Waters stressed that there are reasons why Black people might not trust police. In the past, law enforcement was used as a means to oppress people of color, he said.

"There is this tension that hasn't been explained," Waters said.

For example, he pointed out that Seattle and Portland were once sundown towns. That meant Black people had to be outside city limits by 6 p.m., or the police would enforce so-called sundown rules

"And then you wonder why two generations later," Waters said, "you see this distrust that still has never been fixed."