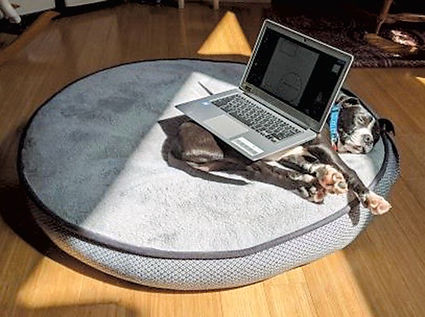 Marshmallow gets the short end of the computer. Kamiak teacher Maggie Lewis took this photo after her son Jack got up to take a break from working on his computer. Lewis' photo was the winner of the Mukilteo Schools Foundation's QuaranTimes Photo Contest.

Kamiak teacher Maggie Lewis was busy on her computer.

So was her son Jack, 9, a third grader at Mukilteo Elementary School.

Since the stay-at-home order was issued in March, the Lewis family has been working from home.

It was early on during the quarantine when Lewis turned around and then rushed to take a photo of the family's dog, Marshmallow, resting quietly on a bed.

Lewis subsequently entered the Mukilteo Schools Foundation QuaranTimes Photo Contest, in which residents documented their lives during the quarantine. Out of 35 entries, Lewis' photos received the most votes from the publi...