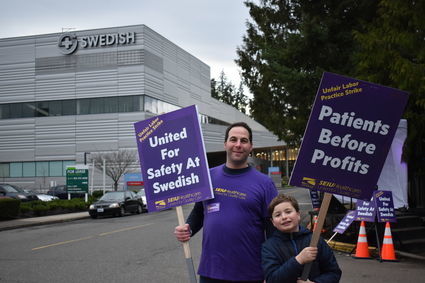 Nurses and technical and service caregivers at Swedish Edmonds walked a picket line Jan. 29 after going on strike. Some brought their children.

The fund will develop work-site innovation leaders, improve recruitment of a multiracial care team, improve the quality of patient care and study new developments in technology. Swedish will commit $1 million over four years to this fund.

"We appreciate the governor's engagement in bringing the parties together to address the key issues for nurses and healthcare workers at Swedish," said Diane Sosne, president of SEIU Healthcare 1199NW, in a news release from Inslee's office.

"It's especially important to have this contract ratified during the novel coronavirus pandemic. The investment of dedicated funding in a labor-management innovation partnership shows a real commitment from Swedish to partner with nurses and caregivers to face present and future health-care challenges together."

The contracts contain a partnership agreement centered on improving the quality of health care, protecting staff and advancing the recruitment of future workers.

Also included is a commitment from Swedish to work with its front line caregivers when discussing staffing levels and joint work on policy issues.

"I am grateful that we came together to finalize these agreements during the unprecedented COVID-19 pandemic," said Guy Hudson, CEO of Swedish.

"Now more than ever, we need to be 'One Swedish' to support our patients, community and each other during this crisis. I extend my thanks to Gov. Inslee for his leadership to bring our two sides together and the mediators who helped find a solution we can both support."

The agreement includes 13.5% wage increases over the life of the contracts and new zero-premium health coverage for employees who earn less than $60,000 annually.

The nurses union and Swedish had been bargaining for nearly a full year before an agreement was finally made.

Nurses and other caregivers at Swedish cited understaffing and low wages as some of the main concerns during contract negotiations and eventually went on strike in late January for three days after bargaining deteriorated. It was one of the largest hospital strikes in recent U.S. history.

During the strike, Swedish spent about $11 million to hire replacement workers to cover vacancies from its striking workers. Still, two emergency departments in Ballard and Redmond, and the labor and delivery unit in Ballard had to close during the strike due to understaffing.

"We need quality staffing so we can take care of our patients the way they need to be treated," said Carissa Masching, a sonographer at Swedish Mill Creek, on the first day of the strike. She was also part of the union's bargaining team.

"We also need to take care of us, as caregivers, to make sure we can continue working and taking care of the patients. It doesn't happen when we're short-staffed."

The two sides met again in mid-February after the strike to begin bargaining again through mediators. The governor's intervention in negotiations was one of the last steps of the year-long saga.

"I want to thank the leadership of 1199NW and Swedish for agreeing to reconvene and work hard to reach this agreement," Inslee said.

"Professor Kochan and Beth Schindler did an impressive job of keeping people talking and all parties focused on the most important goal: a unified health care system to help us fight against this global pandemic.

"I hope the agreements reached serve as a model for how labor and management in the health care industry can work together in these trying times," he said.