Unified Basketball brings the community together 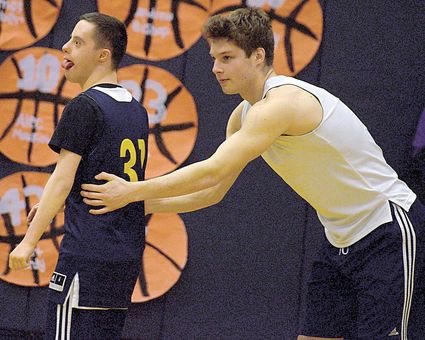 The fierce rivalry between Kamiak and Mariner was on full display at the fourth annual Unified Basketball game.

Shots were launched from inside the paint and outside the 3-point line. Both squads used tough full-court pressure defense for most of the contest.

As the buzzer sounded, the Knights were happy to come out with a 36-24 victory over the Marauders Feb. 6 at Mariner High School.

But as far as players and coaches were concerned, both teams left the court as winners.

"It was amazing," Kamiak's Brandon Yi said. "This is my second time doing this. This game is always the highlight of the season. It's just the best. The feeling of having everyone at school support us is unmatched."

Yi heard about the Unified Track and Field program from a friend and attended an informational meeting.

"I went to the meeting not really knowing what I was going into and then suddenly it started this whole movement with me," said Yi, who participates in bowling, basketball and track and field. "That meeting changed my life."

Mariner junior Jackson Cole, who is the starting quarterback on the football team, was involved in Unified Sports his freshman year. Scheduling conflicts prevented him from coming out his sophomore year.

"I decided that I wanted to come back this year, and I talked with the coach," Cole said. "We made it happen. It's always a lot of fun. The best part of the game is really coming down the court. You see somebody who's open, you give them the ball and then you watch them celebrate. ... Everybody's feeling it. It doesn't matter who scores. We're just here to have a good time and share the love of the game."

Both schools' Unified Basketball teams have seen their numbers increase. Kamiak has 55 players and five practice players. Four years ago, Mariner started with eight players. The Marauders suited up 29 players this time, the highest number in program history.

One of the goals of the game is to increase awareness of Unified Sports in both schools.

"What we want to do is inspire everyone to actually join," Yi said. "At the game, you're seeing Unified Sports in action."

Knights coach George McClaskey attributed the increased numbers to people coming out to games as spectators.

"Students that haven't been a part of it see it at these games and want to be a part of it," she said. "I can't wait to see how it continues to grow."

Kamiak's Sophia Albright participates in all three Unified Sports. She's made many new friends on the three teams and encourages others to get involved.

"They should join the program because it's nice," Albright said.

Kamiak's Raymond Johnson has been a member of Unified Basketball for four years.

Cole especially enjoys how close-knit he and his teammates have become. 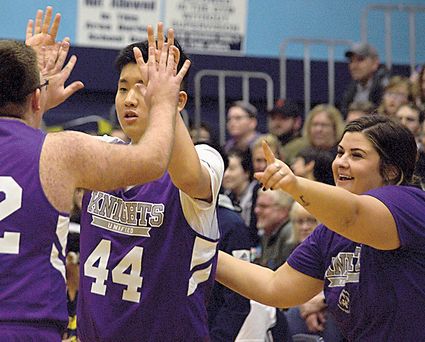 "A lot of teams call themselves a family," he said. "But this is the real family. There are no bad feelings about anything. You miss a shot. Lose a game. It doesn't matter. We're just out here to have a good time. It's really cool to see everybody with so much unconditional love. It definitely brings the community together.

"Everybody comes out here just to have a good time and to work towards a common goal – just work together and enjoy life."

"People put a lot of labels on kids with intellectual disabilities," Richard said. "Then you watch a game like this and I think it can open people's eyes. It's just a great opportunity for people to see a bunch of really awesome kids compete and have a good time and not care about the end of the game."

Yi has learned there are no differences between people with and without disabilities.

"We can all come together," he said, "and just love each other."