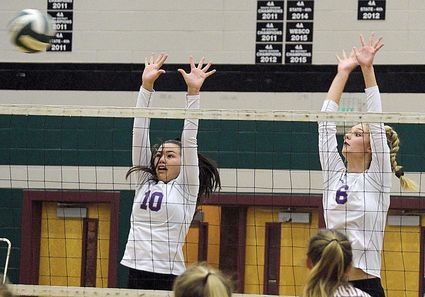 Kamiak's Anatalia Sicsic and Whitney Taylor go up for a block against Issaquah during a first-round Wes-King 4A District tournament match Saturday, Nov. 9, at Jackson High School. The Eagles defeated the Knights 25-17, 25-16, 25-23.

Kamiak had some good moments in its first-round Wes-King 4A District volleyball tournament opener.

Kamiak was scheduled to face Wesco 4A rival Mount Vernon in a loser-out match on Tuesday, Nov. 12, after the Beacon's deadline. The Knights (5-10 overall) lost two 3-2 matches to the Bulldogs (11-5) during the regular season.