Kamiak falls behind 2-0 in first eight minutes of game 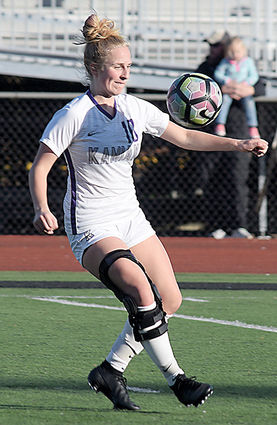 Kamiak's Abby Selbeck waits for the ball to drop to the field during a Wes-King 4A tournament game against Redmond Saturday, Nov. 2, at Redmond High School.

Kamiak got off to a bad start in its Wes-King 4A District girls soccer tournament game against Redmond.

Grace Westby scored a goal one minute into the contest to give the Mustangs the lead.

The game quickly went from bad to worse for the Knights as Redmond extended the lead to 2-0 seven minutes later and added three more goals in the second half to prevail 5-0 in the loser-out playoff game Saturday, Nov. 2, at Redmond High School.

Kamiak ended the season 6-9-1 overall, while Redmond (9-4-2) was scheduled to play Jackson in a loser-out game on Tuesday, Nov. 4, at Everett Memorial Stadium.

The Knights caught a bad break on the first goal when the ball took an awkward bounce off of the artificial turf over the goalkeeper's hands.

Kamiak coach Kosta Pitharoulis said that when the Knights are putting forth their best effort they can play with just about any team out there.

"We had moments where we did that today," he said. "I think it showed. Unfortunately, we just didn't put 80 minutes of it together. ... When we did that throughout the season, we were in most if not all the games."

The Knights swept the season series with Monroe and lost a tough 2-1 contest to league champion Glacier Peak early in the season.

Redmond seized a 2-0 advantage on a header by Sydney Trzupek off a free kick at the eight-minute mark. The early 2-0 deficit was too much to overcome for a somewhat hobbled Kamiak squad.

"I think as a team you have to really show some real mental fortitude in order to come out of those moments," Pitharoulis said. "You kind of lean on some people to help that along, whether it's upperclassmen, captains."

Kamiak took the field without two senior starters and some other key players.

"I think with people being out and unavailable, we weren't able to kind of recover from that moment or those first eight minutes," Pitharoulis said.

Any hopes of a second half comeback were dispelled early on by the Mustangs, who took a 3-0 lead on another goal by Westby at the 44-minute mark. Kait Raffensperger and Sofiya Mitchell scored in the 56th and 63rd minutes.

"Redmond came out to play and played hard," Pitharoulis said. "Their effort definitely came through today."