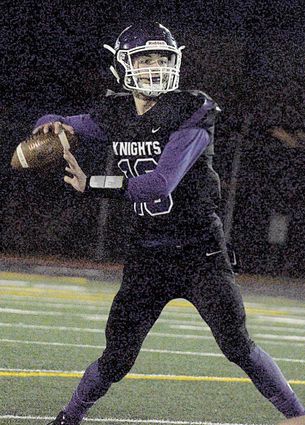 Kamiak's Nick Laman drops back to pass during the Knights' 37-7 victory over the Timberwolves.

Kamiak put together its most complete performance on both sides of the ball.

Junior quarterback Nick Laman completed 11 of 21 passes for 222 yards and two touchdowns and senior running back Mayson Bach ran for three TDs to lead the Knights to a 37-7 victory over Jackson in a Wesco 4A football game Friday, Nov. 1, at Goddard Stadium.

The victory was the first after eight losses for Kamiak (1-6 in the league, 1-8 overall).

"It feels great," Laman said. "We've all worked super hard the entire year and just getting that victory feels amazing."

Friday was Laman's second game back leading the...