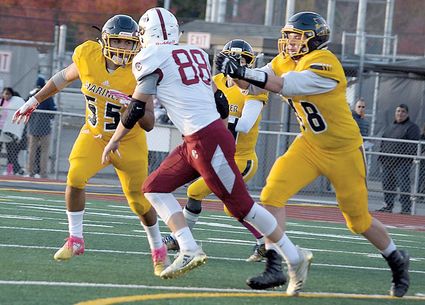 A pair of seniors came up huge for Mariner.

Roman Savchuk scored two touchdowns in the second quarter and Prince Riley added a pair of scores in the third quarter to help lead the Marauders to a 45-28 victory over Cascade in a Wesco 4A football game Friday, Oct. 25, at Goddard Stadium.

Trailing 14-10 in the second quarter, Savchuk intercepted a Bruin pass and returned it 20 yards for a touchdown. Later in the period, he caught a 36-yard pass from junior quarterback Jackson Cole to extend the Mariner lead to 24-14 at halftime.

After Cascade scored in the third quarter, the Marauders respo...