Mariner looks forward to second half of season | Soccer 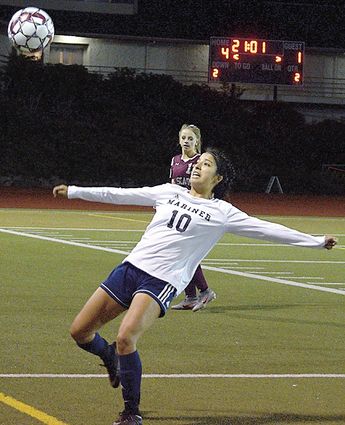 Mariner's Jennifer Pena Sanchez attempts to chase down the ball before it goes out of bounds Thursday, Oct. 3, at Everett Stadium.

Mariner could not sustain a strong first-half performance against Cascade.

The Bruins scored three unanswered goals in the second half to defeat the Marauders 5-1 in a Wesco 4A soccer game Thursday, Oct. 3, at Everett Memorial Stadium.

Despite coming off lopsided losses to Lake Stevens (6-0), Glacier Peak (7-0) and district rival Kamiak (7-0), Mariner stayed right with Cascade for the first 40 minutes.

It appeared that the goal by sophomore forward Nixie Tamayo-Franco off an assist by Mary 'Jay' Jimenez would enable the Marauders to go into halftime tied at 1.

But a penalty and subsequen...