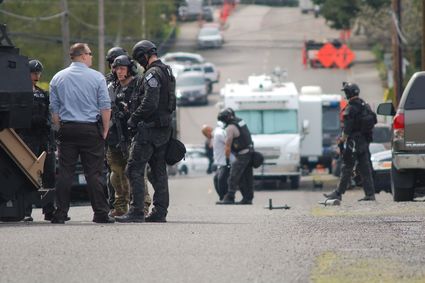 Officers and SWAT members regroup after arresting Larry Castillo after a standoff in Old Town on April 25. Castillo, seen in the back wearing a blue shirt, is accused of domestic violence.

A typically sleepy Thursday afternoon in Old Town was anything but, as the 900 block of Third Street looked more like a war zone than a residential neighborhood after a man assaulted a woman and barricaded himself in her house, prompting a large SWAT and police response.

The man, 36-year-old Larry Castillo of Everett, was arrested and booked into Snohomish County Jail.

According to probable cause documents, officers received a call at roughly 11 a.m. for an assault.

Mukilteo Police Officer Chris Perisho, who wrote the probable cause document, made contact with the victim, a 44-year-old w...