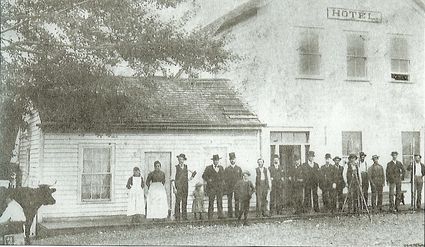 In the late 1800s and early 1900s, visitors to Mukilteo had several choices of where they could stay that are no longer present here. The first of these was Fowler’s Hotel, which once stood on Front Street near where the new ferry terminal is now being constructed. Before joining Morris Frost in Mukilteo, Jacob Fowler had operated a hotel and saloon at Ebey's Landing on Whidbey Island.

When Frost and Fowler started their business ventures in Mukilteo in about 1860, they thought their business would primarily be trading with the Native Americans who passed through and occasionally camped here. They had not planned on providing overnight accommodations, so they only constructed a large building, which was the store, and a smaller building called the Exchange Saloon. Fowler operated the store and saloon while Frost took care of more administrative duties.

As more visitors came to Mukilteo, Fowler decided to rent rooms upstairs in his store, which then became the Fowler Hotel. He had a house built for himself next to his hotel, and he moved into it in April 1861.The first Mukilteo Post Office was located in Fowler’s store/hotel, with Fowler appointed Postmaster in 1861.

Frost and Fowler continued to increase their holdings through the 1860s, taking advantage of the Homestead Act. However, they found themselves over-extended when depression and panic swept the nation in 1873. They started mortgaging their holdings and their businesses were forced into receivership in 1877-1878. Their buildings fell into disrepair and there does not appear to be anything left of them. The property now lies beyond the U.S. Government fence at the end of Front Street and is occupied by the NOAA Fisheries Mukilteo Research Station.

The second hotel in Mukilteo was the Bay View Hotel, located at the northeast corner of Front Street and Park Avenue. The structure was originally located further northeast in a planned town called “Western New York.” That settlement never took hold, so the structure was moved by barge from there and then by block and tackle to its site in Mukilteo. Today, that site is also just inside the fence to the government property closest to the corner of Front Street and Park Avenue.

One of the early owners, Walter Keyes, promoted the Bay View Hotel as the only first class summer resort on Puget Sound. An 1887 advertisement listed the rate of $2 per day for unsurpassed accommodations with such amenities as hot and cold saltwater baths, and the largest dancing pavilion on the North Pacific Coast.

Walter Keyes and his wife Mary were both from Pennsylvania. Mary became a cook at the Bay View Hotel and other members of the Keyes family helped with hotel operations. The Bay View Hotel also contained a grocery store and a second floor restaurant that was a favorite gathering place from the early 1860s through the early 1900s.

Walter and Mary Keyes sold their interest in the hotel to Louise Van Horne Thomas, and later Louis (Lewis) Foster and his wife Mary acquired the property. Louis Foster was born August 1844, in Illinois, and wife Mary was born August 1865, in Scotland. The Foster family lived above the Bodega Saloon (later called Andy’s Place), which was located diagonally across Front Street from the Bay View Hotel. Daughters Elsie and Agnes were born there in 1892 and 1894, respectively. The Foster family ran the Bay View Hotel and its elegant dining room from the early 1900s to about 1914. Although Louis Foster died sometime before 1910, his wife and daughters continued to operate the hotel.

Competition from other hotels and rooming houses in Mukilteo led to a gradual decline of the Bay View, and it became vacant for a while. It was converted into barracks for enlisted men during World War I. After the war, it was used for temporary housing for Crown Lumber Company employees in the 1920s and for an occasional boxing match. It eventually fell into disrepair, was torn down, and the property was acquired by the U.S. Government.

Another early hotel was located across Park Avenue from the Bay View, on the southeast corner of Front Street and Park Avenue (where Ivar’s parking lot is today). Constructed in 1906, the two-story building was first known as Smith’s Hotel, but later changed names and ownership several times.

It became the Butler Hotel in 1911, then the Mukilteo Hotel, then Sherars, then Dutcher’s Apartments in the 1920s, and finally the Saratoga Apartments before it was torn down. At one time, it had a popular restaurant. It also housed a grocery store at other times. During the periods of the Dutcher’s and the Saratoga Apartments, the establishment provided housing for many of the single female teachers at Rosehill School. (Women were allowed to teach as long as they remained unmarried).

In her book, “School Belle,” teacher Mary Lou Morrow recalls living in the Dutcher Apartments with her roommates who were also Rosehill School teachers. They lived across the hall from a couple with whom they had to share a bathroom. One night, they heard loud footsteps on the stair stairway leading to their neighbor’s apartment across the hall. They learned the following morning that the couple had been arrested for bootlegging illicit liquor.

Uphill from the Front Street hotels, there was the Klemp Hotel located on 2nd Street between the N. J. Smith General Store and the Gongia home. The Klemp Hotel, with 56 rooms, was built by Edwin Arthur Klemp and his sons.

Edwin and his wife Inga Marie were both Norwegian emigrants, arriving in the United States in 1884. In 1902, they came to Mukilteo with their four sons and two daughters from Clark County, Washington. The family busied itself with operating their hotel, doing the cooking, serving as chambermaids and sawing wood for fuel. Hotel guests included sailing ship captains and longshoremen.

The Klemps sold their interest in the hotel to George Carlson, and later the hotel was taken over by Art Richter and family. Art’s wife Bertha and her sister, Louise Peterson, did the cooking. Workers from the Crown Lumber Mill often ate their meals there. Disaster struck in 1926, when an explosion from a little heater in one of the rooms caused a fire that completely destroyed the hotel. The hotel was never rebuilt.

A building known as the Mukilteo Garage was constructed on the property formerly occupied by the Klemp Hotel. This building housed a business operated by Joe Whisman for many years as a Mobil Station with a garage for repair work. Later, the building and property became an Enco Service Station. The site no longer appears to be operating as a gas or service station; however, the building still stands at 807 Second Street with a sign on its façade that reads “Mukilteo Garage.” 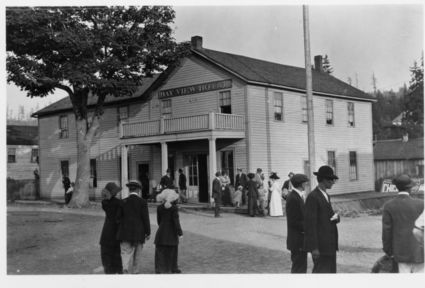 Although not formally called hotels, early Mukilteo also had a number of boarding houses and rooms for rent above various businesses. People of Mukilteo also welcomed visitors by opening spare rooms for temporary accommodations. Although the early establishments are long gone, Mukilteo today offers many choice accommodations for visitors and vacationers. The 2018-2019 Mukilteo Chamber of Commerce Business Directory lists four lodging properties offering a total of 334 units ranging from a small two-room bed and breakfast to a large facility with 134 efficiencies. Today’s innkeepers continue Mukilteo’s long tradition of welcoming visitors with warm their hospitality.