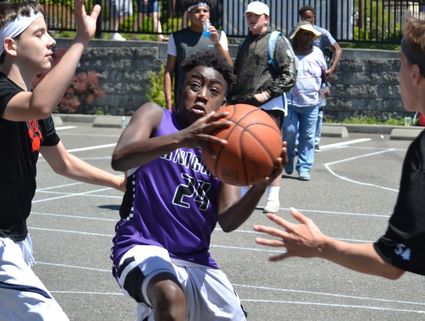 Tijan Saine of Fab4 2018 drives between two Clamper Doodles defenders during the 3-on-3 Star Fest Basketball Tournament Saturday, July 15, at the Mill Creek Festival. Fab4 2018 took first place in the tournament. Saine and teammates Dylan James, Zachary Meyer and Jordan Collins all play or will be playing for Kamiak High School.

The sun and temperatures that rose into the mid-80s did little to temper the energy and enthusiasm of players in the annual 3-on-3 Star Fest Basketball Tournament Saturday and Sunday, July 14-15, at the Mill Creek Festival.

By the end of the weekend, 10 champions were crowned in the youth divisions and two teams won titles in the adult divisions. 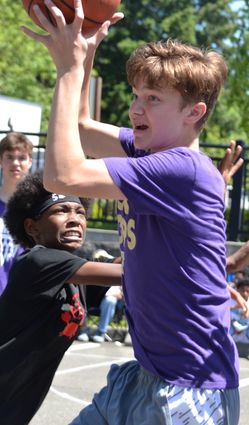 The Fab4 2018, all of whom are playing or will be playing for Kamiak High School, won the eighth/ninth grade division. The team included Dylan James, Zachary Meyer, Tijan Saine and Jordan Collins.