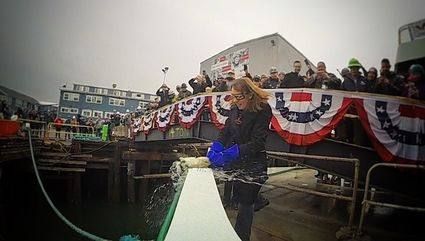 Amy Scarton, WSDOT assistant secretary of the ferries division breaking a bottle of champagne to welcome the newest ferry to the fleet on Thursday, Jan. 4.

After all, the report’s subtitle includes the word “congestion.”

Freeways are crowded, commuter lots are full, and trips anywhere take longer than just a few years ago.

When examining the statistics regarding the Mukilteo-Clinton ferry route, you’ll see that not everything is as bad as it seems.

The on-time performance for the Mukilteo-Clinton route was 96.1 percent in 2016. Although that number is high, and is the fourth highest rate of the nine state ferry routes, it is actually a 1.4 percent decrease from 2014.

In addition to consistently being on time, the route has plenty of space, as it was filled to capacity just 67 percent of the time, up 1 percentage point from 2014.

The numbers for the Mukilteo-Clinton route may increase soon, however, as the route is getting a new boat soon.

The Suquamish can seat 144 cars and will begin carrying passengers in the fall. The new ferry will operate on the Mukilteo-Clinton route next summer and serve as a relief vessel in the winter, when other ships undergo maintenance.

Annual ridership on all Washington State ferries increased 4 percent from 2014 to 2016, with about 691,000 more passengers and 320,000 more vehicles traveling by ferry. Annual trip reliability increased slightly over the same period, going from 99.4 percent to 99.5 percent of scheduled sailings completed, and continuing to meet the systemwide goal of at least 99 percent reliability.

Between 2014 and 2016, total ferry vessel fuel use increased 6.3 percent, and fuel use per mile increased 6.5 percent. This increase is largely attributable to the addition of new, larger vessels to the fleet. Fuel use per mile is influenced by route characteristics as well as type and size of vessel; total fuel use is also affected by the number of sailings.

As unemployment in Washington state approaches pre-recession levels, more drivers hit the road in 2016, according to the report, and again followed the lead of the local economy.

Between 2014 and 2016, commuters in urban areas throughout Washington saw increases in congestion and delay, due largely to the effects of drivers traveling more miles on already-crowded urban highways. The number of miles drivers traveled on state highways increased 6.4 percent from 2014 to 2016 (to a new high of 34.227 billion).

In addition, 3.2 percent more passenger vehicles were registered in 2016 than in 2014. During the same period, the number of licensed drivers increased by 4.3 percent. All these factors combined to add more drivers to Washington state’s already busy roadways.

The number of people riding transit during daily peak periods increased 8 percent on urban commute corridors, from 88,150 in 2014 to 95,300 in 2016. As an example, transit moved 4.5 general-purpose lanes full of cars  equivalent to 52,887 people  on I-5 between Federal Way and Everett during morning and evening peak periods on average weekdays.

Speaking of Everett, WSDOT determined that a typical 7:15 a.m. 23-mile commute from the city to Seattle took 94 minutes in 2016, an increase of nine minutes. Those are 2016 numbers, remember, so it’s no doubt higher now.

Here are some more highlights from the 2017 report:

Of the five monitored freeway corridors in the central Puget Sound region, three (I-5, I-405, I-90) saw congestion increases of 76 percent, 33 percent and 117 percent, respectively, from 2014 to 2016. Tolling and carpooling reduced congestion on SR 520 by 61 percent, while congestion on SR 167 experienced a 4 percent increase compared to 2007 pre-recession levels.

HOV lanes accounted for 42 percent of person miles traveled on central Puget Sound region freeways in 2016 while accounting for 24 percent of the region’s lane miles. 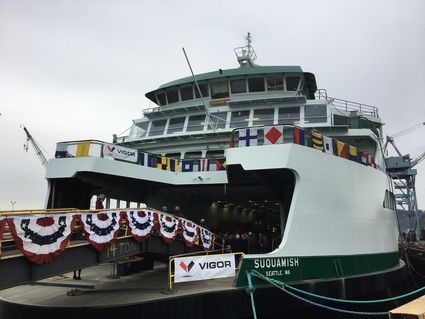 The Suquamish vessel will be a part of the Mukilteo-Clinton ferry route in 2018.