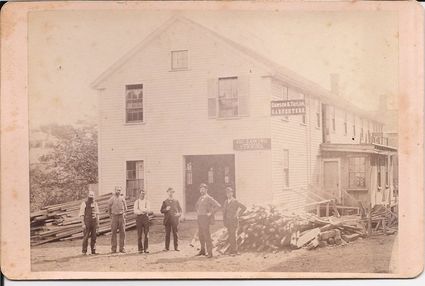 The exact location of this photo of Dawson & Taylor woodworkers continues to stump Tim Raetzloff, as it could have been taken in Washington or Massachusetts.

Because of my connection to Alpine, Washington, ghost town people sometimes use me as a resource for old photos and documents.

Out of a batch sent to me a couple of years ago, I was able to identify some locations, but one eluded me. I finally posted it on the “Alpine, WA” Facebook page to ask for help.

Theresa Anderson succeeded in finding a business of the same name and occupation in Waltham, Massachusetts. We aren't certain that the Massachusetts business is the one in the photo, but it could be. There are some inconsistencies in the information.

But a connection to New England wouldn't be out of character for places in Washington. Historian Andrew Craig Magnuson has done research on the schooner Exact, which brought the Denny Party to Elliot Bay. It was built in 1830 at Glastonbury, Connecticut. It had been brought to the West Coast because prospects for business were better here than in home waters.

New England logging companies also came west. The area between Edmonds and Mukilteo was mostly logged by Mosher & McDonald, which had logged in the Maine woods before setting up shop here.

There are surviving photos of the logging camp that was located about where Dunn Lumber is now, west of Highway 99 at 168th Street Southwest. Their logging railroad ran through there, and if you look you can see traces of the old railroad right-of-way.

Another Maine company was Pope and Talbot, then known as Puget Mill Company. The owners were from East Machias, Maine, and set up shop in what is now Port Gamble. If you take the ferry from Edmonds, and drive to Port Townsend, the drive will take you through Port Gamble.

Many 150-year-old buildings still stand there, and it looks like a mid-19th century Maine town because that is what the builders of the town were familiar with. If you have the time, it is an enjoyable place to get out of the car and wander.

Then there is the Seattle story of the Mercer Girls. Seattle had timber to harvest and attracted men to work the forests, but not many women. Asa Mercer, the first president of the Territorial University  now the University of Washington  went to New England to find marriageable women who would be willing to move to the wilds of Washington Territory. The first group came from Lowell and Townsend, Massachusetts.

You don't even need to go that far to find the New England influence. The founder and first mayor of Edmonds, George Brackett, was a logger from a New England family. His father had served on the USS Washington, a line of battleship built during the War of 1812 in Portsmouth, New Hampshire.

That brings me back to the photo of Dawson & Taylor woodworkers. I don't know whether the photo is from Waltham, Massachusetts, whether it is a local company with a similar name and occupation, or maybe a Northwest offshoot of a New England company.

All are certainly possible. But, it reminds us that the New England influence in Washington, and in Snohomish County, goes back to the beginning of settlement here.

Tim Raetzloff operates Abarim Business Computers at Harbor Square in Edmonds. What he writes combines his sense of history and his sense of numbers. Neither he nor Abarim have an investment in any of the companies mentioned in this column.