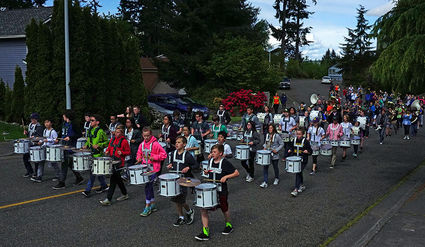 “We had a great day,” band director Jeff Ray said. “We ended up beating all the middle schools and the high schools. That means we actually outscored all the high school and middle school bands in the competition  in marching and music, color guard and drill team.”

Ray said the band received an outpouring of support from the crowd, with some requesting the band play in front of their houses. That was in response to news reports that a neighbor of the Mukilteo middle school had threatened to file a lawsuit against the school district over the band making too much noise while practicing outside.

The band has moved many of its practices inside as a result of the neighbor’s complaints.

“I was surprised at how good the kids looked given our lack of rehearsal facilities,” Ray said. “They really stepped up.”

Sequim High School’s band even presented the OV band with a banner it made in support. That banner now hangs in the band room at the middle school, Ray said.

The band is next set to march in a parade in Selah, Washington, at 10 a.m. Saturday, May 20. Prior to that, the band and drill team will hold a night practice from 6-8 p.m. Wednesday, May 17, between the middle school parking lot and Mukilteo Elementary’s parking lot. The band’s end-of-year concert is set for 7 p.m. June 6 in the school’s gym.

“Wednesday night is our only opportunity to practice outside all week,” Ray said. “We’ll go to Selah this weekend and hopefully we can pull off another miracle.” 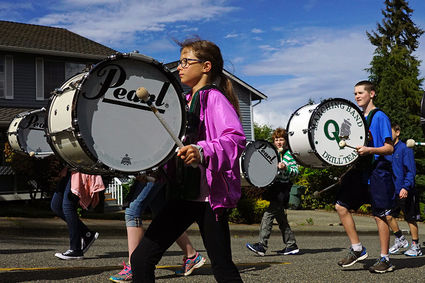