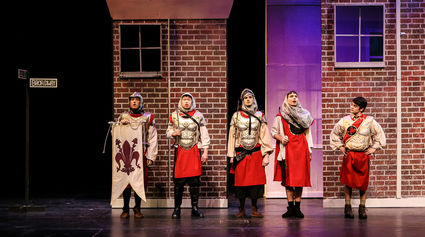 This New Year, Kamiak High School students perform a classic that will make the audience roar with laughter. “The Mouse That Roared,” based on the 1959 film, opens on Thursday, Jan. 15.

If you’ve never heard of it, the following is a summary of its satirical, convoluted plot. It is set in a made up country in Europe located between Switzerland and France called Grand Fenwick.

It’s a very small country that’s about 5 square miles. Its people still live like they did in Shakespeare’s day. Their only export is wine  but America is outselling them, and their tiny nation is about to go bankrupt.

What is the duchess of Grand Fenwick to do? After consulting with an American Boy Scout who came for a visit, she decides to declare war on America. The prime minister, Count Mountjoy, and his adviser, David Benter, agree.

Do they expect to win? Don’t be absurd! What they expect is compensation. Whenever the United States wins a war against another country, the U.S. gives that country money to repair the damage.

However, Grand Fenwick does much more. In order to get America’s attention, the Boy Scout, Tully, is sent back home to surrender and negotiate. He happens to meet a general named Snippet and a scientist named Professor Kokintz.

Who are they? They’re in charge of a bomb that could destroy a vast percentage of the world. Just think of what could happen if Grand Fenwick came into possession of not only these men, but the bomb, as well?

On paper, this all sounds absurd. On stage, it’s even weirder. The story gets a lot of laughs in the same way that “Dr. Strangelove,” “Get Smart” and “Men in Black” do. Anyone who is a fan of those movies, would like this production.

Kamiak has assembled a great cast, with some students alternating parts. The part of the possibly disloyal American Tully, is played by Jack Malloy and John Messick.

The Duchess Gloriana the XII, is played by the delightful Alia Naumoff. Her character becomes infatuated with Tully and wants very much to marry him.

Mike Anderson plays the befuddled and stern General Snippet who can’t believe the turn of events that strands him and his daughters in Grand Fenwick.

The not-actually-evil-genius Professor Kotintz is played by Juno Lee. His character is very interesting, considering what he does for a living. He would also do anything to protect his pet bird. 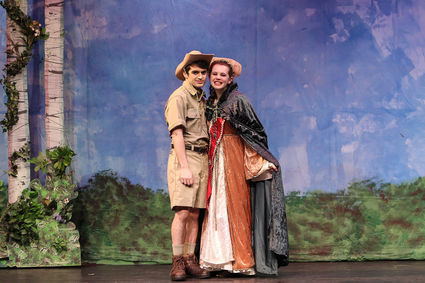 The adviser to the duchess, Count Mountjoy  cool name, isn’t it?  is played by Michael Howry and Andrew Meyers. He resents Tully for taking his place as the right-hand man of the duchess. His colleague, David Benter, is played by Zachary Gregory.

The President of the United States is played by Tristan Mims-Brinkley and Josiah Sakas. He is woefully uninformed about things, but rolls with the punches, as good leaders should.

Don’t miss this very funny satire that will have you exploding with laughter.

“The Mouse That Roared” is playing at Kamiak High School’s Performing Arts Center, 10801 Harbour Pointe Blvd., Mukilteo, from Jan. 15-24. Show starts at 7 p.m. Tickets are sold at the door.