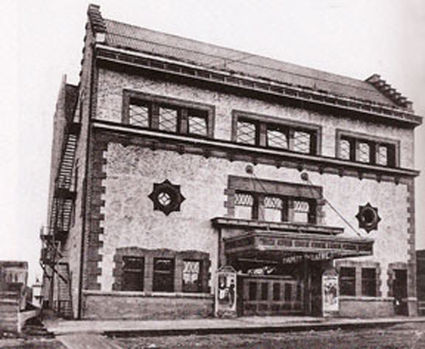 The Historic Everett Theatre circa 1902.

There are few things that last over time. Even historic buildings, built to last, are often turned to dust, only to be replaced by a high rise or a condo.

The Historic Everett Theater nearly met that fate. It has stood proud and strong in Everett, marking the passage of time and bringing joy to many for more than 100 years.

Designed by Charles Herbert Bebb, and built for $70,000, it has played host to an array of talent over the years including such famous names as Helen Hayes, Lon Chaney, George M. Cohan, Lillian Russell, and Fatty Arbuckle.

The building with the impressive dome ceiling has been through many ups and downs over the decades, surviving a fire of unknown origin in 1923.

However, over the past few years the theater has been dying a slow death, from lack of activity and box office receipts.

After the two latest theater groups left, the Historic was finally about to close its doors for good, and was in grave danger of a wrecking ball.

But today, the future looks brighter. Its saviors are Curtis and Craig Shriner, two brothers who’ve thrived in real estate and theater for years. Curtis Shriner was also on the board of directors for the Everett Theatre Society.

When discussion of the theater’s demise came about this last spring, the Shriner brothers took it upon themselves to buy the building and breathe new life back into its walls.

They’ve been doing that with a vengeance. Music groups such as Restless Heart, Little River Band, Foghat, Juice Newton, Molly Hatchet and Dr. Hook are just a few who will be in concert there.

This fall, the Historic will host a Sundance Movie and Wine Night.

They also plan to open the theater every Monday night to groups who work with the developmentally disabled so they can see movies for free.

National illusionist Christian Ford will be appearing in the near future. The Wanderlust Circus is setting up camp in December.

Every three months they will have a Vaudeville Variety Show.

Another theater group called Page2Stage Entertainment will also be putting on plays, starting with a newer version of “The Wizard of Oz.”

They’ve founded a comedy club and are bringing in the long-running national comedy “Late Night Catechism.”

They also have plans for a Rock-N-Roll school as well as a children’s drama school to prosper in this monument to the theater arts.

Hopefully, the Historic Everett Theater will thrive for decades to come thanks to the efforts of the Shriners, their employees and volunteers whom they are still recruiting.

But the landmark needs more if it is to thrive. It needs audiences who are eager to embrace this new dawn of vast entertainment.

Don’t let Curtis and Craig’s efforts be in vain. This theater deserves a place on our streets and in our hearts.