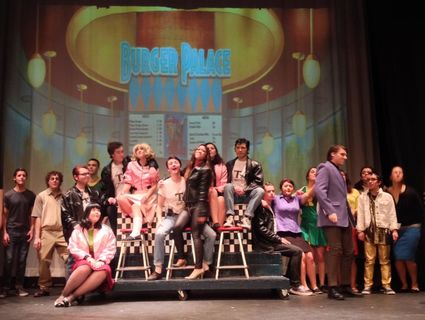 Students at Mariner High School during their presentation of "Grease", playing in March with free showings on March 17 and 18.

Mariner High School is one cool school these days. And what makes them so cool? One word; “Grease.” Yeah, Mariner has chosen to do that musical. Just about everyone knows the plot.

It takes place in the late 1950’s and revolves around a group of student punks known as the T-Birds and the Pink Ladies. Danny Zucco is the leader of the T-Birds. His reputation as a womanizing creep is well-known to most. But is there another side to him?

Over the summer, preceding their senior year, he met a beautiful, innocent girl named Sandy. Because their family was moving, he thought that it was okay to be a gentleman. But what happens when she turns up at his school?

Will she spoil his reputation? Or will he drag her down? It’s a tug of war through the school year, or play. There is also the small subplot of Rizzo believing she’s pregnant.

Along the way, there are some great songs. The best sequence for most would be the school dance, where the kids perform to “Born to Hand Jive,” although “Grease Lightning,” is a close second.

Rhian Juarez plays tough, but sweet Danny Zucco. His performance is spot on.

The part of the innocent Sandy goes to both McKenzie Betts and Stephanie Libed on alternate nights.

The smart cookie Roz is played by both Caylie Parker and Stephanie Pimentel on alternate nights.

The touchy Kenicke is well played by David Salzer. The delightful Frenchy is played by Madison Greinke.

Mrs. Simeone-Myhre would like to thank the students for their hard work in learning the songs and dance numbers. Everyone from stars to stagecraft deserve a hearty congratulations.

Don’t miss the nostalgic and funny phenomenon that has and will entertain generations to come.