Phoenix Theatre is having ‘A Nice Family Gathering’ 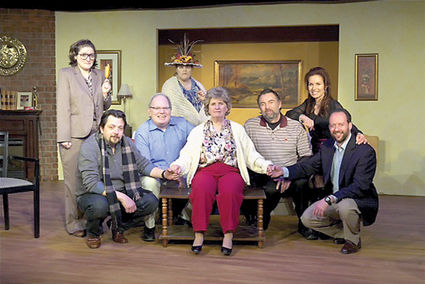 Is there ever a relative that you wish wouldn’t show up for holiday gatherings? That’s the problem that Carl Lundeen Jr. faces this Thanksgiving in the Phoenix Theatre’s production of “A Nice Family Gathering.”

In his case, he wishes his father wasn’t around. Why? Because his father died eight months ago, and only Carl Jr. can see and hear his ghost!

They weren’t on good terms before, but having him as a ghost has definitely put a strain on their relationship.

So why is Carl Sr. here? He wants to spend one last Thanksgiving with his family, and he wants Carl Jr. to tell his wife Helen that he loved her. Something he never said in 41 years of marriage.

The two other grown children come for Thanksgiving, too. Michael followed in his father’s footsteps and became a doctor and amateur golfer.

Stacy is the youngest. They barely notice her either physically or emotionally, often forgetting she’s in the room  something their father can now identify with.

Carl Jr. is the one with big dreams, but a mediocre existence. He’s never felt he had his father’s respect.

The mother, Helen, is having a hard time. In addition to her lost husband, she has symptoms of Alzheimer’s. She’s trying her best to cope with her circumstances. Even if it means dating a little sooner than her children or her husband would like!

This play features an excellent cast. Austin Gregory probably has the hardest part as the black sheep of the family who’s trying hard to cope with the current crisis. You may recognize him from the Phoenix Theatre’s previous production of “God’s Favorite.”

Melanie Calderwood has her work cut out for her as Helen, the bemused wife and mother. Betty White would be proud. She’s been with the Phoenix Theatre for sometime, and has starred in many of their shows.

The deceased Carl Lundeen is played by acting veteran Jay Jenkins. His performance is both comical and tragic. His character was raised to believe that affection should never be expressed. He now knows how much his family felt his emotional absence when he was alive.

Dan Jacoby makes his Northwest acting debut here as the oldest son Michael. He’s trying hard to live up to the image he had in his head of the life he wanted. He’s in big trouble that tries to keep under wraps.

Laura Hanson plays Michael’s emotionally fragile wife Jill. She too is trying to live up to her expectations, but isn’t faring too well with the disappointments of not being able to have children.

Jasmine Joshua plays the neglected Stacy. Her character slowly comes out of her shell, deciding to live her life instead of merely existing.

Jerry, the unexpected guest, is played by Steve Heiret. He’s a force of nature who may be good for Helen.

And Megan McKay plays an annoying neighbor who keeps welcoming the kids home. Sit down with your family for this gathering of great actors.

“A Nice Family Gathering,” is playing at the Phoenix Theatre now through Dec. 22. It is at 9673 Firdale Ave, Edmonds, on the second floor.