And all that jazz! 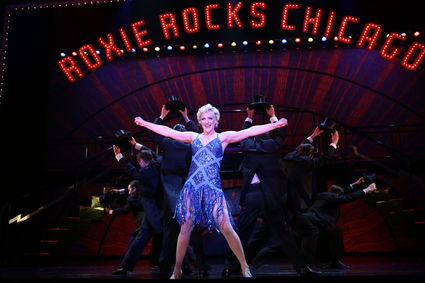 Taryn Darr stars in Village Theatres production of Chicago, on stage through July 28.

The Village Theatre concludes another fantastic season with “Chicago,” a story of corruption, lying, cheating and the lure of celebrity.

The Broadway musical, of course, came before the Academy Award-winning movie, and as such, features a few songs that didn’t make it to the film, as well as a slightly different finale.

“Chicago” is set in the 1930s in (where else) Chicago. Roxie Tart is a two-timing floozy who is obsessed with fame. But she has a little problem  she’s just shot her married lover for failing to get her into show business.

Her husband, Amos Hart, unwisely decides to stick by her, despite her treachery. Roxie is then sent away to the Cook County Jail where she meets a number of women who’ve committed similar crimes.

One woman, Velma Kelly, killed her husband and sister for being closer than in-laws should be. Like Roxie, she knows how to use publicity to her advantage.

Thanks to the prison matron Mama Morton (who takes many bribes) both Velma and Roxie end up with the same lawyer.

Lawyer Billy Flynn is a silver-tongued devil. All three of them  Velma, Roxie and Billy  revel in the spotlight of the media. Getting their charges dropped is secondary to making a name for themselves while they’re faced with the trial.

The songs are all fast-paced and catchy, and includes such hits as “Cell Block Tango,” “Razzle Dazzle,” and “All That Jazz.” The dancing is flawless. The sets are great. And the costumes are almost, but not quite too revealing.

The cast is splendid. Taryn Darr takes the lead as the narcissistic Roxie. It’s an unusual role for her, as she usually plays the ingénue, as she did in Village Theatre’s productions of “South Pacific” and “Grease.”

The egotistical Velma is played by Desiree Davar. She has quite a pedigree having guest starred in “30 Rock” and “CSI: New York.” She reminds one of Liza Minnelli, but for anyone who saw her in “Cabaret,” that’s high praise.

Village Theatre veteran Timothy McCuen Piggee makes a great Billy Flynn. Although he can’t be considered a villain, Billy definitely someone who doesn’t mind real murderers getting off. He’s been in “Damn Yankees,” “Peter Pan,” and “The Man of La Mancha,” to name a few.

The role of the high priced Mama goes to Shaunyce Omar, who is making her Village Theatre debut. She comes close to duplicating Queen Latifa’s success as this unassuming patron who knows all the angles.

Also setting foot on this particular stage is Ryan P. McCabe who plays enthusiastic reporter Mary Sunshine. Her character always writes in favor of rehabilitation instead of punishment.

And last but far from least, is Amos Hart the gullible and neglected husband. He’s played by Richard Gray, who you might recognize from “The Producers.” His rendition of “Mr. Cellophane” is a very moving performance. You almost wish the story had been about him.

Don’t miss all that jazz. It’s time to take a summer vacation to “Chicago.”

“Chicago” is playing at the Everett Performing Arts Center through July 28. For ticket information call 425-257-6800 or go to http://www.villagetheatre.org.