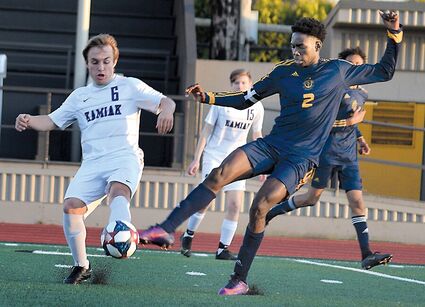 Kamiak's Aidan Drought battles for the ball with Mariner's Amadou Jadama (right) during a Wesco 4A game April 19 at Goddard Stadium.

Kamiak took a hard look in the mirror at halftime of its game against archrival Mariner.

The Knights trailed 1-0 but could have been down by more as two shots bounced off the crossbar and one of the goalposts.

The difference between the first and second half became apparent, with a much higher energy level from the Knights.

"I would say it was the flip of a switch," Pitharoulis said.

Senior Cade Weatherbie tied the score at 1 with a goal in the 64th minute and three minutes later junior Koll Pehlivanian produced...