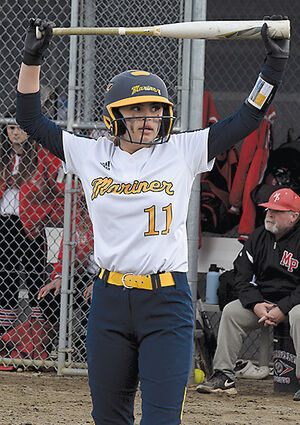 Mariner's Sammi Bruton stretches during a plate appearance against Marysville-Pilchuck.

The Mariner softball team is off and running.

Behind senior pitcher Alexis Slater, the Marauders opened 2022 with impressive nonconference victories over Marysville-Pilchuck and Shorecrest.

The 5-2 win against the Tomahawks Wednesday, March 16, was the first season-opening victory since Nathan Beachy's first season as head coach five years ago. Mariner then followed up with a decisive 11-0 rout over Shorecrest Friday, March 18.

Mariner's offense was dialed in from the first pitch of the season opener, as the team pushed across one run in the bottom of the first inning. "We started out the g...