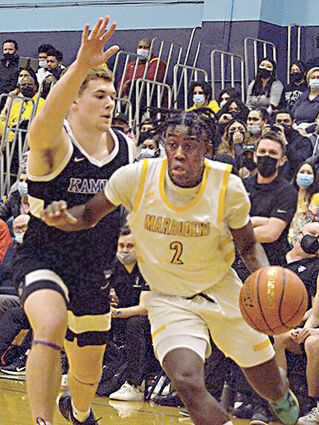 Mariner's Tijan Saine dribbles to the basket while being guarded by Kamiak's Wesley Garrett.

The Marauders finished with a 7-1 league record and claimed the Wesco 4A crown with a 65-51 victory over district rival Kamiak in a boys basketball clash Feb. 4 at Mariner High School.

It was the second straight season Mariner (7-1 in the league, 13-6 overall) has finished atop the league. Last year, the Marauders went 10-0 in a combined Wesco 3A/4A.

"It feels good. We really worked hard tonight," Mariner coach Tevin Dillon said. "They (Knights) always come out hard against us. They're always tough. They're a good team."

The Marauders rode a bal...