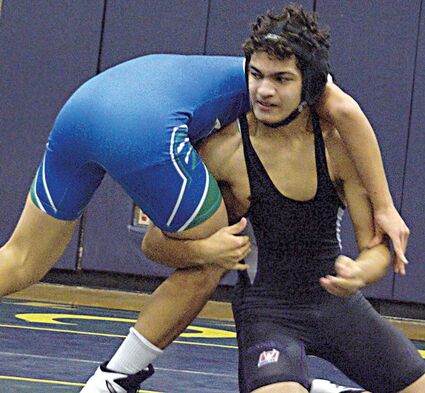 Kamiak's Giovanni-Ethan Besson grabs the leg of a Shorewood opponent during a 126-pound match Thursday, Dec. 9, at Shorecrest High School.

The 2021-22 season will be a challenge for Kamiak coach Tyler Webley and his coaching staff.

The Knights return some solid experience in wrestlers such as senior Mark Holcomb (285) and sophomore Rico Gonzales (170), who each won their classifications at the Mariner Holiday tournament Dec. 4.

Then there are the dozen or so other wrestlers without the mat time that Holcomb and Gonzales have.

"We took a survey of the 25 remaining kids, and 11 or 12 of them have never put a singlet on,"Webley said. "There's a lot of green sprinkled in with some experience. It is interesting. We have some promising kids and some very green kids."

Holcomb and Gonzales both made the most of 2020's abbreviated season.

"Mark Holcomb kept grinding even with the limited mat time last year," Webley said. "He's really starting to come into his own. Rico Gonzales found a way to stay on the mat, and it really shows. He found a community, and it kept him focused."

The Mariner tournament was a good way to start out the season, as it gave the Knights an opportunity to get some different looks from opponents.

One Knight to watch out for is 126-pounder Giovanni-Ethan Besson.

"He's an up-and-coming guy," Webley said. "He's adapting very quickly to everything thrown at him. We show him something, he does it. Each time we see him wrestling, he keeps getting better."

The pandemic had a definite impact on the Kamiak wrestling program, with many Knights simply not having a lot, if any, mat time, due to no middle school program. The lack of club wrestling programs in the area didn't help.

Just how green are some of the kids?

Some of them had never weighed in before.

"We got blank stares," Webley recalled.

One of the main areas the coaches are working is building the Knights' confidence. Webley likes what he's seen so far.

"They truly enjoy the sport," he said. "We run a hard practice. They're willing to stick around and try to be better athletes. They want to be here. If you're willing to learn, push hard, and fight, we can work with that."