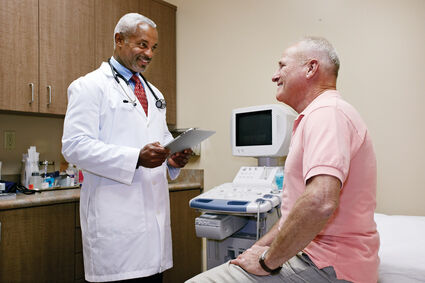 A recent survey found that more than 45% of men age 45 and up reported they have avoided events or activities they enjoy because of a bothersome urinary symptom.

Men with urinary symptoms common with an enlarged prostate, also known as benign prostatic hyperplasia or BPH, may anticipate and plan for urgent and frequent bathroom needs and even avoid events and activities they enjoy because of their urinary symptoms.

Whether they rearrange their morning schedules in anticipation of interrupted sleep, limit the amount they drink or purposefully seek out and stay close to the bathroom, this is known as extreme bathroom planning and can disrupt normal daily activities.

In men with BPH, the enlarged prostate presses on and blocks the urethra, causing bothersome urinary symptoms, such as an urgent or frequent need to urinate or the sensation that the bladder is not empty after urinating.

These symptoms can significantly impact a man's quality of life, leading to interrupted sleep and even a loss of productivity and depression, according to research published in "British Journal of Urology International."

When they do attend an event or perform an activity, a significant number of men surveyed make plans or take action to accommodate their bathroom needs. In fact, more than 40% have chosen certain routes on road trips because they have more or better availability of restroom facilities.

Additionally, about 1 in 5 said locating the closest bathroom is the first thing they do when they go somewhere new, and about 43% selected seats when purchasing tickets to an event based on proximity to the restroom.

These "extreme" bathroom-planning habits are not just limited to daytime activities. Many men with urinary problems, including BPH patients, experience frequent nighttime waking to urinate.

The majority of those surveyed (more than 70%) said their energy levels have been impacted during the day because they get up frequently at night to urinate.

To avoid this, about 3 in 4 men (74.8%) limit the amount they drink in the evening. Some men (about 22%) have even slept in another bed or room than their spouse, partner or significant other to avoid waking him or her when getting up to urinate.

"It's important for men to be aware of symptoms of BPH, including frequent trips to the bathroom during both daytime and nighttime," said Ana Fadich, vice president of the nonprofit Men's Health Network. "While not all urinary symptoms are caused by BPH, men over the age of 45 who are experiencing urgent or frequent urinary symptoms should consider speaking with their doctor about their prostate health."

More than 12 million men in the U.S. seek treatment for BPH.

BPH is unrelated to, but more common than, prostate cancer, according to the American Cancer Society, and if left untreated can lead to permanent bladder damage.

Medications are a common treatment option for men diagnosed with BPH. Among those surveyed, more than 65% have taken medication to treat their condition. However, nearly 1 in 4 said their medication was "not very effective" or "not effective at all" at helping reduce their need to plan their next bathroom trip.

BPH relief through medication can be inadequate with potential side effects such as sexual dysfunction, dizziness and headaches, prompting many men to quit using their BPH treatment medications.

A study published in the "Journal of Urology" also found commonly prescribed BPH medications are linked to an increased risk of new instances of heart failure in some men.

Among men participating in the Teleflex survey, those men taking BPH medication and who have never had a medical procedure or surgery to treat their condition, more than two-thirds (66.81%) said they are extremely, very or somewhat interested in a minimally invasive procedure that could help reduce their bathroom visits and planning needs.

An option like the UroLift® System is a minimally invasive treatment for lower urinary tract symptoms due to BPH. It is indicated for the treatment of symptoms of an enlarged prostate up to 100 cubic centimeters in men 45 years or older.

The UroLift System permanent implants, in many cases can be delivered during an outpatient procedure and is a proved approach to treating prostate obstruction without heating, cutting, destroying or removing prostate tissue.