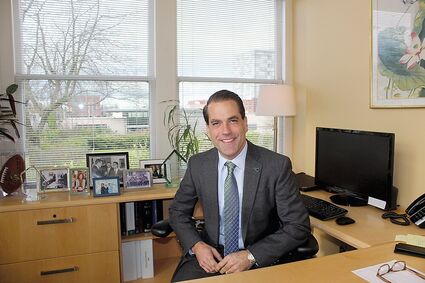 Adam Cornell in his Everett office

Adam Cornell, who rose through the ranks in the Snohomish County Prosecutor's office to be elected prosecutor, said he will not run for a second term.

Cornell, who lives in Edmonds, said he will finish his term, which runs through the end of 2022.

Cornell spent more than 16 years as deputy prosecuting attorney. He ran unopposed in the general election in November 2018 after longtime county prosecutor Mark Roe – who endorsed Cornell's election – stepped down.

Cornell's a lifelong Democrat – candidates must state a party preference when filing for the office – but the daily work of a prosecutor is meant to be nonpartisan.

Cornell has faced some controversy during his tenure, including two cases in Edmonds.

Last summer, Cornell's office declined to file a hate crime charge against a 69-year-old man who was later convicted of vandalism on a City of Edmonds-sponsored artwork titled "I Can't Breathe." The installation, made by an Edmonds-Woodway High School student to bring attention to the murder of George Floyd, was installed on the Civic Field on Sixth Avenue North, opposite the police station.

And in 2019, Cornell spoke to the Edmonds Diversity Commission to explain why his office declined to charge a Lynnwood woman with malicious harassment after she allegedly made racial comments and threats against two African-American teenagers outside the now-closed Harvey's Lounge in Edmonds.

"After careful and deliberative review of both the facts, as established by the investigative record, and the applicable law," Cornell wrote in an editorial for The Beacon, "my office decided not to file criminal charges against the suspect in the Feb. 4, 2018, incident at Harvey's Lounge because the referred charge could not be proven beyond a reasonable doubt.

"While the alleged racial slurs directed towards the victims in this matter are abhorrent and shameful and have no place in a civil society, those words alone – in the absence of a true threat under the law – did not constitute provable criminal conduct."