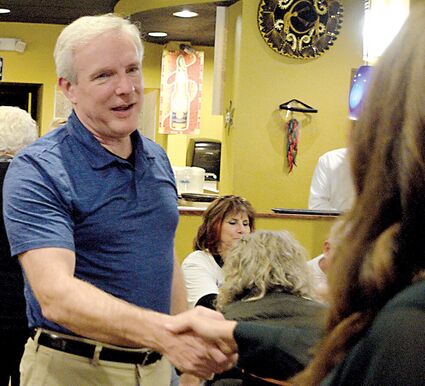 Councilmember and former Mayor Joe Marine greets a visitor during an election night gathering Tuesday, Nov. 2, at Sabor a Mexico.

Joe Marine was on pins and needles as he waited for the first round of results in the general election during a gathering with supporters Tuesday, Nov. 2, at Sabor a Mexico.

The current City Councilmember and former mayor said he felt good heading into his rematch with Mayor Jennifer Gregerson, who eight years earlier had denied Marine a third term as mayor.

This time, Marine emerged as the candidate with a decisive victory over an incumbent mayor, who was seeking a third term.