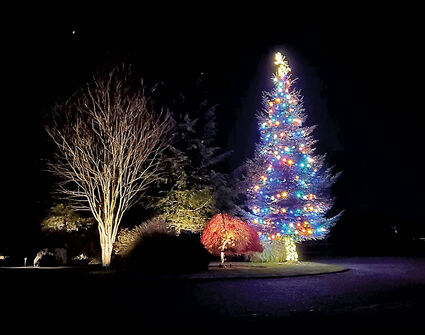 From traditional lighting needs to special occasions or holidays, Outdoor Lighting Perspectives is available for all of your outdoor commercial or residential landscaping lighting needs.

Thanks to its temperate, wet climate, the Great Northwest is known for its rich and colorful landscape. And a journey through Snohomish County neighborhoods reveals that many homeowners take advantage of that climate, and proudly cultivate their lawns and gardens.

It's often a sight to behold ... until the sun goes down. All their hard work disappears in the dark. It's especially noticeable this time of year when days grow short and nights long.

Rob Bingham, an engineer turned entrepreneur, thinks there's no reason that diligently manicured landscapes can't be enjoyed after dark, too. His company, Outdoor Lighting Perspectives of Everett (OLP of Everett), takes landscaping to the next level with personalized lighting systems that bring out the wonders of a homeowner's property after dark.

Bingham's background in the corporate world included years of visionary product development. Natural ability paired with a talent for teamwork prepared him for this new challenge.

Typically, a homeowner approaches OLP of Everett with a desire to improve his home's landscape with lighting, but doesn't have a firm idea of how to go about it. Bingham does.

"That's playtime for me," he says. "Typically, I'll do a little research on the house, and visit the client to get an idea of what they want."

Then he'll put together a proposal, plant a seed, "and they're chomping at the bit."

It doesn't even have to be purely conceptual. OLP of Everett can do a nighttime demo at the house to give the homeowner a taste of what's possible, "so when they see it, their jaws drop," Bingham says. "Then it's no longer a question of 'if,' but of 'how many lights they want.'"

Of course, a homeowner can go to a big box store, buy a string of lights or two, and set them up. Think extension cords running along the ground and through the bushes, circuit breakers blowing, and windstorms knocking the whole shabby project down.

OLP of Everett installs systems that are designed to last. Bingham has put together a team of trained professionals who respect the property, expertly install a custom system, and leave the landscape as clean or cleaner than when they arrived.

"If a landscape is well kept, I can make it look spectacular," Bingham says. He knows it needs to be, because "every house I do is a living billboard for our company."

Not surprisingly, OLP of Everett gets busy this time of year installing holiday lighting. Just like their year-round projects, you get the same attention to detail.

Besides lights, they also install wreaths, garlands and other holiday decorations. "It's not going to look like Chevy Chase's "Christmas Vacation, unless you want it to," he says.

They make sure to discuss every option, including dimmer switches, timers and other particulars, small details that can take a project "from ow to wow!" Bingham says.

Whether it's a temporary holiday decorating project or a permanent outdoor lighting system that brings nighttime landscapes to life, Bingham promises OLP of Everett does only high-quality installations.

That attention to detail is ingrained in Bingham, who worked at some of corporate America's biggest names where quality is demanded.

In fact, he moved to the Northwest out of college to work at Boeing on airplane flight decks. "It was a phenomenal job out of college," he says, "but I knew I wanted to do more than just design airplanes"

Finally, after 30 years that included way too much travel, Bingham decided he was done with corporate America.

But the visionary, product development and management skills he had honed over those decades were ideal preparation for launching OLP of Everett here, which he and his wife Beth, "the perfect partner," started in the spring of 2020.

While other businesses were slowing down and shutting their doors as the pandemic exploded, it turned out to be the ideal time for their company.

"For six months, people were stuck, couldn't go to Hawaii, and were looking at their house and thinking about making improvements," Bingham says. "Surrounded by the darkness, they thought, 'What can we do?'"

Bingham says OLP of Everett can do it for them. "That's where I shine."

For a consultation and quote, call Outdoor Lighting Perspectives of Everett at 425-658-2050 or visit their website at OutdoorLights.com/Everett. See their ad in The Beacon to learn how to get $100 off your holiday lighting project.