Two of a kind | Cross country 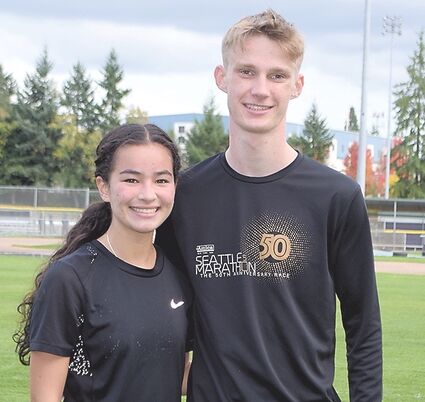 Kamiak's Emma Arceo and Jackson Hammons are among the top cross country runners in the state.

The Kamiak cross country teams pack quite a one-two punch.

Seniors Emma Arceo and Jackson Hammons each cruised to easy victories at the Everett/Mukilteo championships Thursday, Oct. 14, at McCollum Park.

Arceo finished the girls race in 18 minutes, 43.2 seconds, almost a minute ahead of teammate Bella Hasan, who clocked in at 19:48.9. The Knights won the team title with 27 points. Jackson took second with 36, and Everett was third with 69.

"I was pretty controlled, and that was the goal of that race," Arceo said. "I've seen lots of improvement with every race, which is what I was hoping, especially coming out of the pandemic. I've had faster times. I was hoping for some big PRs."

Last spring's cross country season only consisted of league competitions, and did not have any invitationals or postseason races. Arceo often was way out in front of the pack, running by herself.

The Kamiak senior welcomed the challenge of going against some of the state's top runners in the Carl Westling, Twilight, and the Hole in the Wall invitational this season. Arceo won at Westling and was a top 5 finisher in the other two races.

"I love racing with everybody," Arceo said. "The competition definitely helps with our team dynamics. You're racing against faster girls, which makes you faster."

After running behind some talented teammates the last couple of years, Hammons has emerged as the clear No. 1 on the Knights' boys squad. Hammons also won the Westling Invitational, and was a top 6 finisher in the other two major invitationals.

"I feel like it's been a good year," Hammons said. "I've made a big jump. I've been racing with the top people. It's been a big confidence booster."

Kamiak coach Charley LeWarne is glad to see Hammons slide into a leadership role on the team.

"He's kind of a quiet, unassuming guy," he said.

LeWarne noted that for a couple of years Hammons was the best No. 3 runner out there.

"It's great to see him have that chance to just really be in step with where he left off with the other two guys," LeWarne said. "All of a sudden, it's your show. But he filled it in nicely and really never missed a step with it, and he's running great."

Even as a freshman, Arceo was one of the front runners for the Knights.

"They're very different individuals," LeWarne said. "Emma's talkative and right there and telling everybody how exactly it should go. And Jackson is Mr. low key and mellow and laid back. They're pretty good friends, so that makes for a nice complement.

Up next for Arceo, Hammons, and their teammates are the Wesco 4A championships on Saturday, Oct. 23, at Arlington High School.

Arceo is looking for a top 10 finish at state, and also wants to set a personal record before graduating. Her all-time best time is 18:30, and her best time this year is 18:42.

Hammons' goal also is a top 10 finish at state.