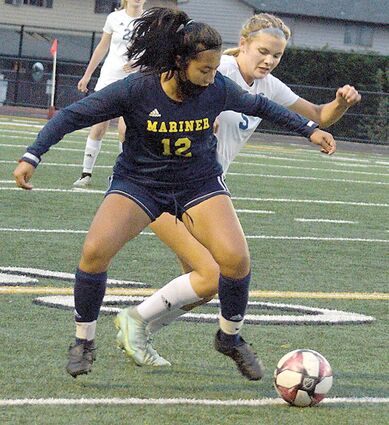 Mariner's Ashley Carreon tries to keep the ball away from a Bothell player.

The Marauders recorded their first victory of the season, a resounding 5-1 triumph over Friday Harbor Tuesday, Sept. 14 at Goddard Stadium.

Bowlden switched up the lineup, moving freshman goalkeeper Aisha Carreon into the field and the change paid off in a major way.

"She had a really big impact on the field," the Mariner coach said. "We have some really star players. We were able to connect passes and move the ball. We took a lot of shots. We hit the crossbar four times. That's been our bigg...