Pilot rescued after plane goes down near Edmonds marina 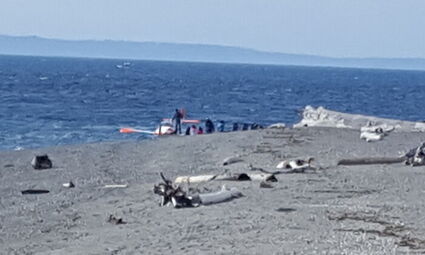 A Coast Guard boat searches the water near the Edmonds Marina where a small plane crashed Thursday, Aug. 26.

An eyewitness to Thursday's crash of a small plane near the south end of the Edmonds Marina breakwater said the pilot landed the plane in a controlled descent.

"It appeared the propeller was stationary in a vertical position," said Milo Hegamin. "An engine could be heard, but it may have been one of the other small planes circling overhead after the crash."

Hegamin took pictures of the pilot on the wing of his plane with two to three minutes of the crash.

He added that the pilot appeared to be transported by boat within five to 10 minutes of the crash, and the plane was fully submerged with...