Not just a brewpub: The sinking of MV Diamond Knot | History Files 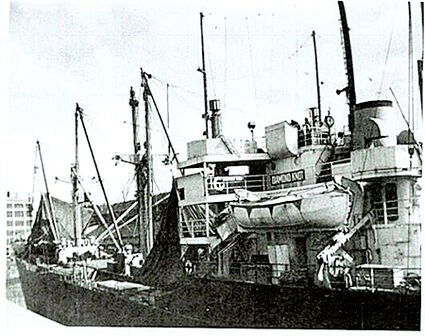 The MV Diamond Knot sunk in the Strait of Juan de Fuca after colliding with another vessel in 1947.

The name Diamond Knot is familiar to many residents of southwest Snohomish County. Many are acquainted with the brewpubs in Mukilteo and Mountlake Terrace, but few know the origin of the name.

MV Diamond Knot was a coastal freighter built for World War II. It became famous, or notorious, when, in 1947, it was run down in foggy conditions in the Strait of Juan de Fuca by SS Fenn Victory.

Fenn Victory had also been built for World War II use, but it had been delivered just a month before Japan surrendered and, likely, didn't see any useful service. Fenn Victory was one of the Victory ships named for a college, in this case Fenn College in Cleveland, Ohio.

The crew was rescued, but the tow didn't make it to Port Angeles. Diamond Knot sank in 135 feet of water near Crescent Bay. That location was shallow enough that the cargo of canned salmon and fish oil could be mostly recovered.

According to Feliks Banel of MyNorthwest, the salmon was checked for spoilage, recooked, recanned, and sold with the following message on the labels: "Diamond Knot salmon, twice caught, twice canned, twice labeled, twice packed. Given to you with our best wishes twice over."

Neither Diamond Knot nor Fenn Victory had radar, which these days would make this type of collision unlikely. The first commercial radar had been installed only the year before, on MV Kalakala, the famous art deco ferry.

It would be several years before radar would be common, or required, on commercial vessels.

The Salish Sea was the main traffic corridor in Washington and British Columbia, the I-5 of its era.

Travel on the corridor was not always safe. Notable shipwrecks involved considerable loss of life.

SS Clallam sank on the relatively short run from Port Townsend to Victoria with the loss of at least 56 lives, including all women and children aboard. Princess Sophia sank further north on Vanderbilt Reef with the loss of all 318 aboard. One dog, an English setter, was the sole survivor.

Dix was in use essentially as a ferry between Seattle and Port Blakely, which were then two of the busiest ports on the West Coast. To visit Port Blakely now, you would have no idea of its intensely industrial past.

The loss of life on SS Verona in Everett's Port Gardner Bay was of a different sort, politically motivated rather than a result of the inherent dangers of the sea.

When the Verona began to tie up to the dock, Sheriff McRae, who had "deputized" 200 men in Everett, stepped forward and told the Wobblies they couldn't come ashore.

At some point, a shot was fired, and gunfire erupted. After 10 minutes of gunshots, at least five Wobblies were dead, along with two deputies.

It was later determined that the dead "deputies" had been shot by other "deputies." It appears that all of the deaths were caused by gunfire from the shore and by crossfire from a tug that the sheriff had rented to hold more "deputies."

The history of the waters of the Salish Sea is certainly not at all peaceful and carefree.

Think of that when out in a pleasure boat or riding a Washington State Ferry.