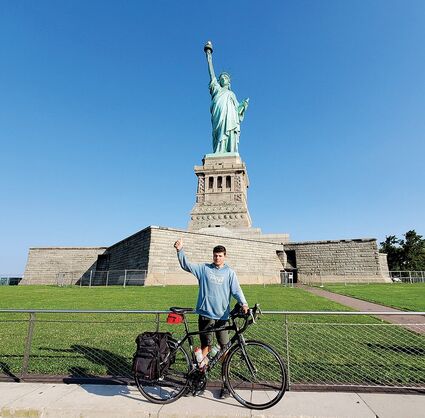 Deven Boyce wrapped up his Light to Liberty ride July 29 at the Statue of Liberty in New York City.

Deven Boyce stepped off of his bicycle for the final time and dipped his front tire into the Atlantic Ocean.

After 55 days on the road with a pair of five-day breaks, 3,200 miles of bicycling, 16 states, thee flat tires, two new tires, and one broken spoke, Deven had just completed the trip of a lifetime.

The 14-year-old Mukilteo resident started his Light to Liberty ride by dipping his tire into Puget Sound June 2 at Lighthouse Park.

He ended it with his grandfather, Jon Boyce, and a group of police officers who escorted him July 29 to the Statue of Liberty in New York City.