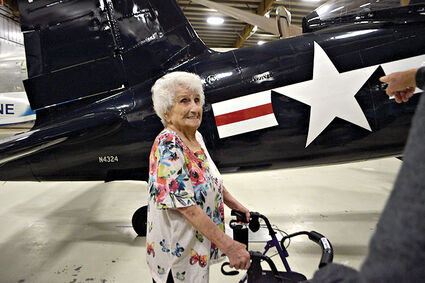 Helen Mary Vaudrin visits the Museum of Flight's Restoration Center Wednesday, June 23. Vaudrin was a real-life Rosie the Riveter, who helped make airplanes during World War II. She stopped by to take a look the museum's Goodyear F2G-1 Super Corsair, an airplane she helped build.

The Museum of Flight's Restoration Center at Paine Field had a special visitor Wednesday, June 23.

Helen Mary Vaudrin, a Monroe resident who turned 100 last December, was a real-life Rosie the Riveter at the Goodyear Aircraft plan in Akron, Ohio, during World War II. She helped make F4U Corsairs and the late war-Goodyear F2G-1 Super Corsair during her career.

A few years ago, Vaudrin visited the Museum of Flight with her grandson John Stefanov and was reunited with the museum's F4U Corsair made at that plant. She had never seen once since the war.

Vaudrin had been waiting for the pandemi...