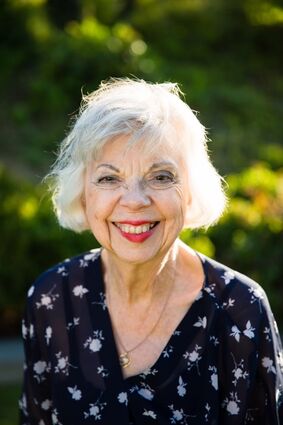 Ann was born in Seattle, Washington, the oldest of two daughters, to John (Jack) and Betty O'Brien. She attended Shoreline High School and graduated in 1961. She met her husband, Jim, on a blind date, and they were married six months later. After initially settling in the Seattle area, they left for West Germany in 1966 after Jim enlisted in the Army. While there, their oldest child was born, and they returned to the states in 1968. After the birth of their second daughter, Ann went to work for Shoreline Savings Bank for a time until their third child, a son, was born. The family moved to Mukilteo in 1978 where she continued to raise their three children and be involved in various school and city activities like the Mukilteo Police Advisory Committee. Ann went to work for the Mukilteo School District in the mid 80s, first as a substitute, and later as a para-educator specializing in English as a Second Language teaching for 21 years at Explorer Middle School. Ann and Jim enjoyed 50 years of marriage before his passing in 2013.

Following her retirement, Ann became very active in the Mukilteo Seniors Association, as well as many civic groups like the Mukilteo Historical Society and helped with the Mukilteo Lighthouse Festival. Ann was a loyal attendee of the former Mukilteo Farmer's Market as well as various Mukilteo events.

Ann was a devoted and active church member at Northshore Christian Church, specializing at greeting newcomers at her "post" in the lobby before services. Historically the family attended a variety of churches including North Seattle Christian Missionary Alliance Church, Beverly Park Christian Church, and Antioch Alliance. She remained committed to missions her whole life and was a woman of daily prayer and devotion. Ann realized her life-long dream of traveling to the Holy Lands in 2016 with members of her church family.

Ann was a friend to all and many. After Jim's passing, Ann attended a weekly widow's group, various small groups associated through Northshore Christian Church, coffee klatches and luncheons, and weekly Silver Sneakers classes at the Mukilteo YMCA. She was constantly busy with social interactions until the very end of her life.

Ann is survived by her three children: Ann Margaret (Pete), Rhonda (Terje), and Brien (Michelle). She was the proud grandmother to five grandchildren (Karina, Roan, Larissa, Reichen, and Rourik). She was preceded in death by her husband Jim, her parents, and sister, Eileen.

In memory of Ann, her family would like you to go out with a friend for a cup of coffee or a glass of wine and a laugh.

Ann will be interned next to her husband at Tahoma National Cemetery on Friday, July 9 and a celebration of her life will be held at Northshore Christian Church on Saturday, July 10 at 1 p.m. All who knew her are welcome to attend.

Donations in Ann's name can be made to the Providence Regional Cancer Center Partnership or Northshore Christian Church.