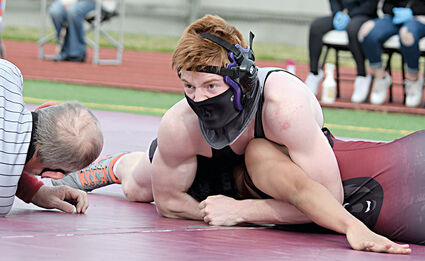 Kamiak's Sam Serati closes in on a pin of Cascade's Nam Ngo in a 145-pound bout Wednesday, May 26, at Cascade High School.

The scorekeepers at the Kamiak/Cascade wrestling match definitely had to sharpen their pencils.

After the whistle was blown in the final match, the two teams were tied at 42 in the Wednesday, May 19, clash staged outside on the Cascade football practice field.

That's when the fun began.

Several minutes passed before the Knights were declared the victor 43-42, based on the sixth tiebreaker. The criteria are based on forfeits.

In this case the numbers favored Kamiak.

Webley, who previously was an assistant coach, said...