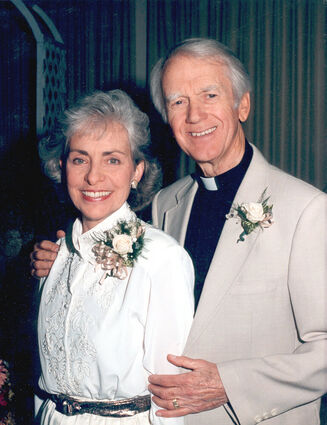 Rita (Reed) Bennett was born in Lake Huron, Michigan, in 1934, and was the third child of William and Loretta Reed. She was very fond of her brothers, Dr. William Standish Reed and Robert Reed, DDS, now deceased, and her surviving sister, Georgia Reed Danahy.

The family moved to Tampa, Florida, in 1936, where she spent her childhood and teenage years. Rita gained a bachelor of arts in education at the University of Florida in 1958, and went on to work in the Florida State Department of Education in child welfare. This work equipped her well for her calling to heal the broken in heart and soul.

In 1966, she married The Rev. Canon Dennis J. Bennett, a well-known Charismatic Episcopal Priest, and they began a wonderful marriage of service to the Lord. In 1968 they founded Christian Renewal Association Inc. (CRA) to minster worldwide and across denominations in Evangelization, Healing and Church Renewal.

Rita made her mark as a writer when she co-authored with Dennis their classic book, "The Holy Spirit and You" (1971). Dennis passed away in 1991, leaving Rita to carry the torch on her own. Rita has gone on to write numerous other books including You Can Be Emotionally Free, The Lord's Prayer Heals, To Heaven and Back, Heaven Tours–Astonishing Journeys, and A New Look at the News which is a 6-year collection of worship column articles written for the Edmonds Beacon.

In 2008 Rita earned her master's of arts degree in Applied Behavioral Science, with an emphasis in Family and Marriage Therapy, from Bastyr University in Kenmore, Washington. She specialized in Counselling with Compassion and Spiritual Wisdom to many in leadership, as well as individual care to families.

Oral Roberts University conferred a Honorary Doctoral degree, which recognized with distinction Rita's extensive work in emotional and spiritual healing, saying, "We thank God for what He has accomplished through you, and we want to honor you as a person, for what you have done in His name."

Rita was pleased to also receive an Honorary Doctoral degree for Dennis posthumously that day.

Rita was in frequent demand as a speaker, TBN television host for 11 years, an Edmonds Beacon worship columnist for six years, and a teacher and Bible study leader for retreats and seminars, in many different denominations in the U.S. and overseas.

Tens of thousands of people's lives have been transformed through her ministry.

Although Rita did not have any natural-born children, she leaves behind two stepsons, Steve and Conrad Bennett, numerous nieces and nephews, thousands of spiritual children, and friends and co-workers in the Vineyard.

Rita and Dennis's spiritual legacy will live on through these people and through the ongoing work of their ministry of Christian Renewal Association Inc.