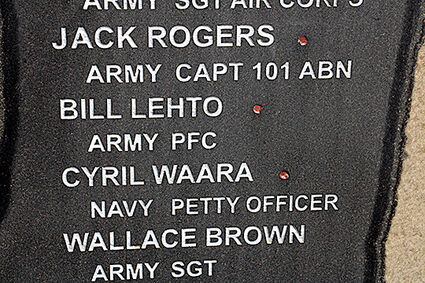 The "blood dots" after a person's name on our Mill Creek Veteran's Monument, identifies three of the six who gave the ultimate sacrifice for our country. The other three Killed In Action (KIA) are Carrie French, Army, Iraq; Harlan R. Winkler, Army; WWII-Korea, Phillip D Vinnedge- USMC.

In 1964 our Uncle Sam sent a young 20-year old Army private, who proudly wore on his uniform collar a brass medical symbol, Caduceus (kuh-doo-see-uhs), to Korea. This upstart medic was thankful for his training to save lives and not take them. So during his 395-day Korean tour when the few anecdotes dwindled in during his deployment they always caught his attention.  It was while "debriefing" at his compound Enlisted Men's Club that he first heard about some heroic actions by a nameless U.S. Army captain and Catholic chaplain.

His "beyond the call of duty" events happened during his "Korea...